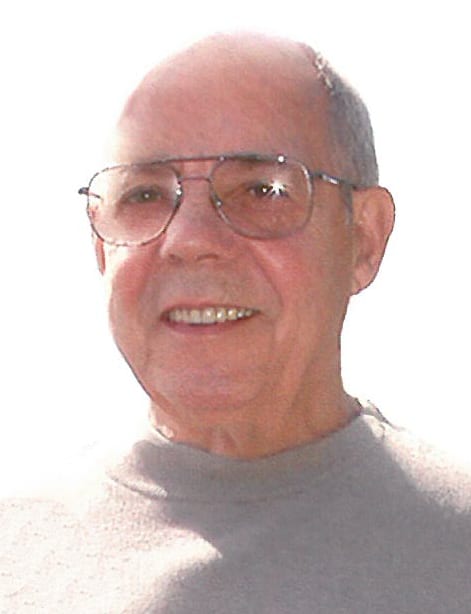 Due to current circumstances, a private service is being held for the family on Wednesday, May 27, 2020.  Family and friends are welcome to view the service in a livestream on this website at 11:00 AM on May 27.

Kenneth Edward Pomeroy, age 90, died Sunday, May 17, 2020 surrounded by his loving family. Ken was born in Kaukauna on September 11, 1929, to the late Wilbert and Clara (Blair) Pomeroy. He met his future wife, Vi, on a blind date with her sister, Franny, and Franny’s future husband Mel. He married Vione M. Jager on September 27, 1955 at Holy Name Catholic Church in Kimberly, Wisconsin. They would have celebrated 65 years together this September.

Ken joined the army at the age of 17 where he was stationed in Austria as a communications specialist. During his time in service, he enjoyed traveling throughout Europe. He instilled his joy of travel in his children and grandchildren.

Following his time in the army, Ken worked for 40 years at Thilmany in Kaukauna until his retirement in 1991. After he retired, Ken purchased the first computer in the family and enjoyed using it to explore his genealogy and track their budget. He was very proud of his computer skills, even teaching a granddaughter how to use it.

Ken enjoyed camping, hunting, fishing, traveling and playing cards with his family. He was the king of campfire pancakes and he always won at cards. He also took pleasure in going on casino trips with Vi, friends and family where he won his sports car with bingo number G46! One of Ken’s favorite stories to tell was about when he attended the Ice Bowl with his two brothers and froze his butt off.

Ken’s memory lives on through the strong work ethic and two mottos that he instilled in his family that have been passed down for generations: 1) If you’re going to take the time to do something, do it right the first time; 2) If it doesn’t work, don’t force it.

Ken loved being a grandpa. He attended countless sporting events, concerts, plays and Grandparent Days. His beloved grandkids include Megan, Hannah, Sarah, Kristen, Kimberly, Katelyn, Nicole, John, Laura, Allison, Brooke, Zach, Candice, Josh, Ryann, Jack and his step granddaughters Kimberly, Amber and Sarah. Ken was also blessed with 12 great grandchildren with two more on the way and 10 step great grandchildren. Ken is famous among his grandkids for his “double wave” as they were leaving the driveway. We know he is giving them all a double wave from heaven.

Ken was also loved by many nieces and nephews including eleven Godchildren.

Ken’s family would like to extend a heartfelt thanks to the staff of Rennes in Appleton and Compassus Hospice Care for all their special care.

Ken ended all his cards to Vi with Ich liebe dich, which is German for I love you!

Due to current circumstances, a private service is being held for the family on Wednesday, May 27, 2020.  Family and friends are welcome to view the service in a livestream on this website at 11:00 AM on May 27.