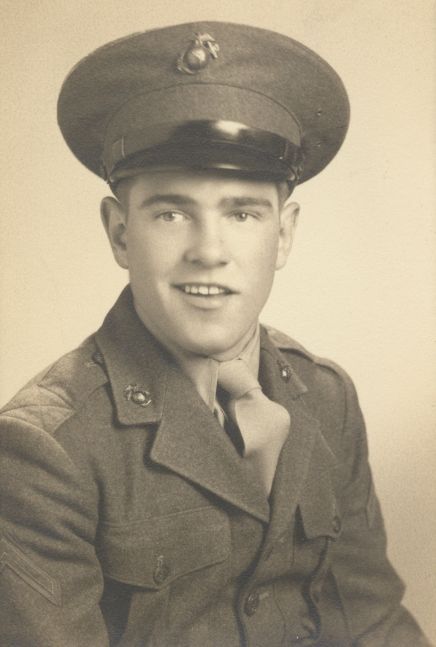 Kenneth Emil Korth, age 79, of Appleton, passed away on Saturday, March 16, 2013 at Pine Manor. Ken was born on January 11, 1934, son of the late Elmer and Wilma Korth. He was the third oldest of nine children.
Ken attended St. Paul Lutheran grade school in Appleton, where he was baptized and confirmed. At age 17, he entered the United States Marine Corp engaging in heavy fighting in the Korean War and also served in Japan. After the war, Ken spent the majority of his working life as a carpenter in California. Ken was also an avid sports fan. He loved the Packers, Boston Celtics and the Atlanta Braves.
Ken is survived by his brothers, William “Bill” Korth and Howard (Milly) Korth. He is further survived by his sister-in-law, Sandy Korth; his aunt, Grace Vander Hieden; his favorite niece Jo Hanna Helein; his best friends, Dick and Mariot Williams; as well as many other nieces, nephews, relatives and friends. He was preceded in death by his parents; his son Joe; his daughter, Bea; his sisters Ruth Koepke, Dorothy Koepke, and Norita (Joseph) Glasheen; and brothers Elmer Korth, Donald Korth and Roger Korth.
A memorial service for Ken will be held at 11:00 a.m. on Saturday, March 23, 2013, at the WICHMANN FUNERAL HOME DOWNTOWN (537 N. Superior Ave) with Rev. Mark Henke officiating. Full military honors will follow. A time of visitation will be held from 10:30 a.m. until the time of service. Online condolences may be expressed at www.wichmanfargo.com.
The Korth family would like to thank the Pine Manor Healthcare Center for all their kindness and care for Ken.