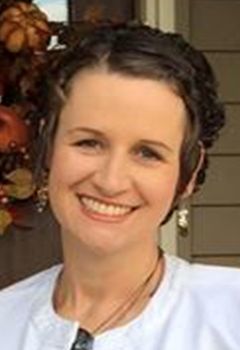 Kelly Marie Hayes, 35, Appleton, passed away peacefully at home on Wednesday, May 25, 2016 in the presence of her family after a courageous 18 month battle with a rare adrenal cancer.

Kelly was born on July 12, 1980 in Tulsa, OK to Patrick and Janice (Mitchell) O'Connor. She graduated from Bishop Kelly High School in Tulsa in 1998 and went on to further her education at the University of Kansas earning a B.A. in Communications and Psychology in 2002. She then attended graduate school at the University of Oklahoma – Tulsa where she earned her Masters in Social Work in 2005. On May 5, 2007 she was united in marriage to Ryan Hayes. Kelly worked as a therapist, case manager, and family support worker for the Associated Center's for Therapy and Family and Children's Services in Tulsa, OK. She then went on to become a social worker for several hospices in Oklahoma and Georgia as she moved around the country with her husband for his job. Upon the birth of her children, Kelly suspended her career in social work, but in 2013 she began working from home as a virtual assistant. In 2014, she started her own virtual assistant business, Kelly's Virtual Approach, but suspended this venture after her cancer diagnosis in order to focus on her family and treatment plan. Kelly was a truly incredible daughter, sister, wife, mother, and friend. Her approach to life, even in the toughest days of her battle with cancer, have been and will continue to be an inspiration to many. She documented her battle and beautiful lessons on life in her blog warriorshamrock.wordpress.com. Her courage, wisdom, kindness, and selflessness as expressed in this blog and the manner in which she lived have touched thousands and will continue to do so for years to come.

In lieu of flowers, donations can be directed to Ally's Wish, a non-profit organization whose purpose is to provide a “last wish” to young terminally ill mothers with small children.

The family would like to the thank Kelly's tremendous medical team whose knowledge, care, and compassion bought Kelly meaningful time with her precious family and friends: Dr. Tito Fojo – Columbia University Medical Center (formerly of NIH/NCI), Dr. Udai Kammula and Dr. David Schrump – National Institutes of Health/National Cancer Institute, Dr. Xin Yao – Fox Valley Hematology Oncology, Dr. Nathan Munson – Radiology Associates of Appleton, Dr. David Ebben and Dr. Edward Szabo – Primary Care Associates, and the countless nurses and other staff that provided such tremendous care to Kelly. Additionally, the family would like to thank the phenomenal team at Heartland Hospice who provided Kelly with exceptional care and comfort in her home during the last few weeks of her life. Finally, the family would like to thank the tremendous network of family and friends near and far that provided unending support. Because of your support we were able to navigate the last 18 months in a beautiful way. We only hope we can pay this back in the same way you have all paid it forward.