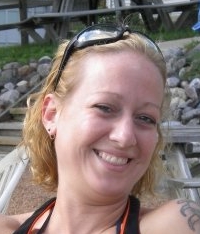 Kelly M. Wilquet, age 32, passed away on Wednesday, March 2, 2011, at Appleton Medical Center, after a long illness. Kelly was born on September 1, 1978 in Appleton, daughter of Ronald and Sheila (Reinke) Wilquet. She attended school in Appleton and Kaukauna. Kelly worked for many years at Thilmany Papers in Kaukauna. Kelly loved riding motorcycles, listening to music, watching movies, cooking and eating. Throughout her illness, she was admired by her family for her strength and positive attitude. Kelly will be greatly missed by her family.
Kelly is survived by her fiancé, Marty, and his children, Dakota and Christian, whom she thought of as her own; her father and his wife, Ronald (Diane) Wilquet; her mother, Sheila Wilquet; two sisters, Paula (Jason) Lilly and Sarah (Erick) Martzahl; her paternal grandfather, Melvin Van Wychen; ten nieces and nephews; and many other loving relatives and friends. She was preceded in death by her baby, Olivia, with whom she is now reunited; her maternal grandparents, and paternal grandmother; an uncle, Richard Wilquet; and an aunt, Bobbie Van Den Eng.
A memorial service for Kelly will be held at 2:00 p.m. on Sunday, March 6, 2011, at the WICHMANN FUNERAL HOME, 537 N. Superior Street, Appleton. Friends may call on Sunday at the funeral home from 11:00 a.m. until the time of the service. In lieu of flowers, memorial contributions in Kelly's name may be made to a fund being established at Fox Communities Credit Union.