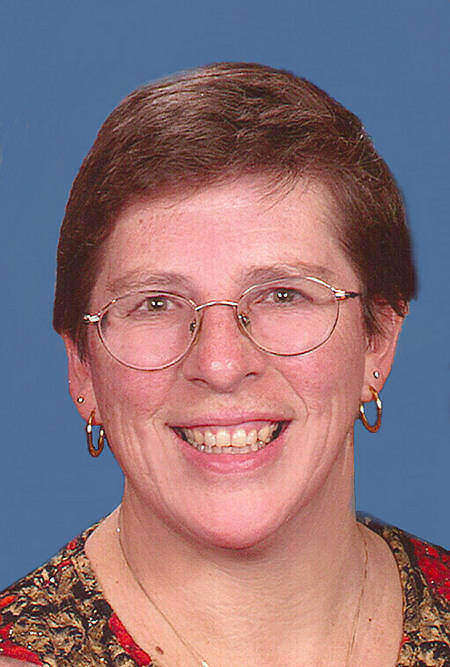 Age 50, of Appleton, passed away Tuesday, July 1, 2008, after a courageous battle with cancer.
Kay was born in Manitowoc on August 5, 1957, the daughter of Leroy and Theresa Kohlbeck. As a young girl, the Kohlbeck family moved to Appleton where Kay grew up and touched so many lives. Kay graduated from Xavier High School in 1975, and immediately began working at a local Shopko store. Kay married Robert G. Rosenow and during their marriage had three children, Tammie, Andrew, and Adam. Kay worked her way up the chain for Shopko, taking on many different titles along the way. On September 28, 1990, Kay married Bernard Palmer, and had two more children, Kelsie and Taylor. After 23 years at Shopko, Kay left their store and began a new job with Murphy Construction Company (MCC), where she worked as a billing specialist until just a few months ago. Kay was a very fast learner and could adapt to change at the drop of a hat. Kay always seemed to know exactly what a friend or co-worker needed, just at the right time. No matter what challenges came in her direction, she never allowed herself to falter. Kay created a positive atmosphere wherever she went. Even as life threw its curveballs her way, Kay's persistent determination enabled her to provide support and stability in her loved one's lives.
Kay enjoyed attending all of her children's sporting events, and did so religiously throughout the past 25+ years. She also enjoyed Milwaukee Brewer games, Green Bay Packer games, and any local team she could show her support for. Kay loved sitting in the hot sun reading in the summertime, cooking more than enough food for her family at numerous gatherings, and especially enjoyed attending Country USA each year in June to see her favorite country acts up close.
Kay leaves behind her parents, Leroy and Theresa Kohlbeck, Appleton; her husband, Bernard “Bernie” Palmer; her five children and six grandchildren, Tammie Rosenow (fiancée Ron Viaene) and her daughter, Hallie, Appleton, Andrew (Shauna) Rosenow, and their children, Andrew, Dane, and Jonathon, LaCrosse, Adam (Cathy) Rosenow, and their children, Breahna and Adam James “A.J.”, Neenah, Kelsie Palmer, and Taylor Palmer, both at home; her two brothers, Keith (Cindy) Kohlbeck, and their children, Amanda, Josh, and Dillon, Appleton, and Kevin (Ginger) Kohlbeck, and their daughter, Alexandra, New Franken; her brothers and sisters-in-law, Debbie (Jeff) Ropella, and their children, Christopher, Eric, and Jacob; Connie (Rick) Gauerke, and their children, Rhiannon, Joshua, and Kyle; Phil (Ronnie) Palmer, and their daughters, Sky and Sheena; Tom Palmer, and his children, Leshane, Jill, and Jesse; David Palmer; and Shawn (Hyeonju) Palmer, and their daughters, Phoebe and Audrey; and Kay's godfather, Leo Krall; she is further survived by many aunts, uncles, and cousins.
The funeral mass for Kay will be celebrated at 11:00 a.m. Tuesday, July 8, 2008, at ST. PIUS X CATHOLIC CHURCH, 500 West Marquette Street, with Father Thomas J. Farrell and Father Donald Zuleger concelebrating. Visitation will be Monday from 4:00 p.m. until 8:00 p.m. at St. Pius Parish, and again Tuesday from 10:00 a.m. until the time of mass at the church. Kay will be laid to rest in the Star of Hope Chapel Mausoleum. In lieu of flowers, the family has established a memorial in Kay's name. Wichmann Funeral Home
537 No. Superior St.
Appleton 920-739-1231
Online condolences at
www.wichmannfargo.com-