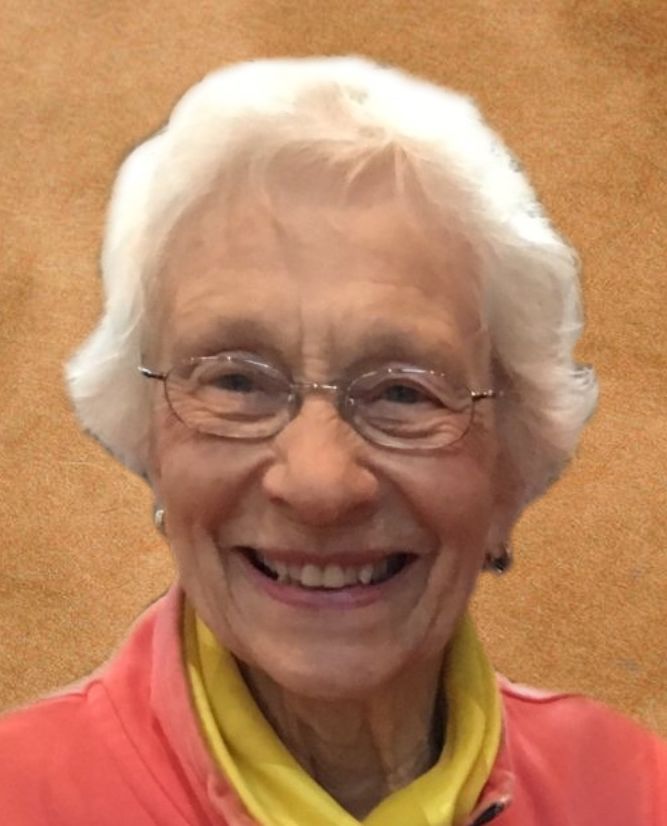 Kathryne “Kay” Lee (Baarstad) Hoffland was born on March 21, 1929 in Mahnomen, MN to Archie and Anna. After Archie died in 1936 Anna took her family of 5 children to live in Detroit Lakes, MN.

At the young age of 5, Kay began taking piano lessons. She played her first recital at age 5 and performing became a part of her life. She started playing for services at First Lutheran Church at age 7 and accompanied singers and choirs during her high school years. Kay graduated from Detroit Lakes High School in 1946. Her love of music continued as she studied piano under Paul J. Christiansen at Concordia College in Moorhead, MN and sang in the Concordia Choir. It was there she met Richard Hoffland, a tenor and a WWII veteran, who was a friend of her brother, David. Dick needed an accompanist at Concordia and asked Kay. It was the beginning of a loving and musical relationship that flourished throughout their many years together. A highlight for them both was the choir tour to Norway in 1949. They were married on June 8, 1950 in Detroit Lakes.

Kay and Dick were a team. Kay was at the piano while Dick directed the choir. The first church to benefit from their team was Second Presbyterian Church in Bloomington, IL. Kay also taught junior high music, and they started their family. The team moved to First Lutheran Church in Sioux Falls, SD. Kay taught private piano lessons and continued to accompany. In 1959, the family moved to Decatur, IL. Kay continued to assist Dick at his choral position at Millikin University. Kay eventually became the Assistant Director of Choral Music at Millikin. She also taught private lessons at home and at the University. In 1970, the team took a sabbatical to USC in California. Kay studied Accompaniment under Madame Koldofsky to further enhance her keyboard proficiency. The Millikin Choir students became like a second family. Many students remained in a close relationship with Mom Hoffland throughout the years.

Two of Kay’s greatest skills were her ability to sight read and to memorize music. These skills were put to good use as she provided accompaniment for the Paul J. Christiansen Choral Schools and at Mount Carmel in Alexandria, MN. She played for worship services and recitals and planned innumerable programs. For many years, Kay and Dick directed their own summer music camps at Camp Augustana in Lake Geneva, WI; Joyful Voices in Green Lake, WI; and at Mount Carmel. They retired from Millikin University in 1991 and soon after moved to Fridley, MN. As Dick’s health declined they moved to Mount Carmel to be closer to family. The Mount Carmel Trio was formed with Kay- piano, Sonja- cello, and Jane Schuneman-violin. The Trio provided another opportunity for Kay to plan and play in music programs always giving glory to God.

Kay directed many choirs throughout the years, both children and adults. In Decatur she directed choirs at Westminster Presbyterian and Pilgrim Lutheran. The last choir position that she held was at 7500 York in Edina, Minnesota, for the Yorke Singers. In October, 2017, Kay was diagnosed with a debilitating lung disease. She spent her last 3 months at Cherry Meadows Hospice Center in Appleton, WI. On April 30, 2018 she was transferred to her heavenly home.

Kay had a special exuberance for life. Her love of the Lord and attitude of thankfulness and joy were infectious to all she would meet. This contagious spirit continued throughout her life even to include her final days at Cherry Meadows.

She was preceded in death by her husband of 52 years, Richard; her granddaughter Kirsten Hoffland; her brothers, David Baarstad and Sherman Baarstad; and her sister, Marie Baarstad.

A memorial service celebrating Kay’s life will be held on Saturday, May 19, 2018 at 1:30 p.m. at Prairie Lutheran Church, 11000 Blossom Road in Eden Prairie, MN. Burial will take place in Wisconsin at a later date.

The family would like to offer our heartfelt thanks to the staff and caregivers at Cherry Meadows Hospice Center in Appleton, WI for their loving and compassionate care of Kay during the final days of her life.

Memorial gifts may be sent to Concordia College in Moorhead, MN; Mount Carmel Ministries in Alexandria, MN; the Hoffland Scholarship Fund at Millikin University in Decatur, IL; or the Norway House in Minneapolis, MN.