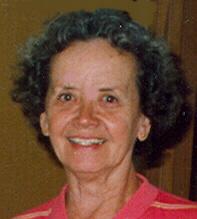 Age 92, formerly of Appleton, passed away Saturday, February 10, 2007, in Madison.
Kathleen was born January 17, 1915, In Gillette, to Frank and Mary (Finnegan) Schwalbach. On July 4, 1936, she married Joseph Patenaude who preceded her in death in 1987. The Patenaude‚Äôs were parishioners at St. Mary Catholic Church, Appleton, and Kathleen was employed with the Balliet Insurance Agency for many years until retirement.

A Memorial Mass for Kathleen will be celebrated at 11:00 a.m. Saturday, March 10, 2007, at ST. MARY CATHOLIC CHURCH, 312 South State Street, with Father Michael O‚ÄôRourke as celebrant. The family will receive friends from 9:30 a.m. Saturday until the time of mass at St. Mary‚Äôs.