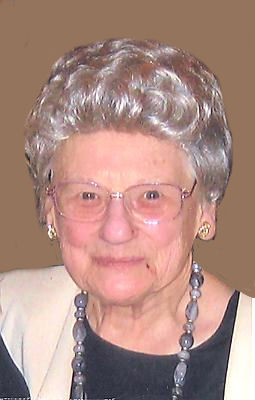 Katherine Reindfleisch, age 93, of Appleton, passed away on Tuesday, November 23, 2011 at Appleton Medical Center after a short illness. She was born in Milwaukee on February 16, 1918, to the late Ernest and Florence (Fido) George. On April 24, 1943, Katherine was united in marriage to Richard Reindfleisch till his death in 1982. They lived in Milwaukee until 1959 when they purchased the Washington Hotel in Cecil, Wisconsin. In 1966 they returned to Milwaukee. In 2010, Kay moved to Appleton to be closer to her family.

Katherine was preceded in death by her husband, Richard; daughter, Shirley Capelle and her sister, Florence George.

The family would like to thank the ThedaCare at Home Hospice staff and the 8th floor at Appleton Medical Center for their kindness and care of Katherine.

The funeral service for Katherine will be held at 1:00 pm on Monday, November 28, 2011 at WICHMANN FUNERAL HOME TRI-COUNTY CHAPEL with Rev. Dr. Tom Fritz officiating. Entombment will take place at Wisconsin Memorial Park, Brookfield. A visitation will be held at the funeral home from 11:00 am until the time of service. In lieu of flowers, a memorial fund has been established.