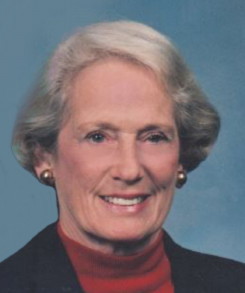 Katherine Benton Hale, 87, of Appleton and Egg Harbor, Wisconsin, passed away on Thursday, March 20, 2014. She was born August 17, 1926 in Appleton to Katherine (Simmons) and Homer H. Benton. She was married for 62 years to Dr. William H. Hale, who passed away in 2012. She is survived by two sons: Dr. William B. (Suzanne) Hale of New Canaan, Connecticut and Thomas A. Hale of Chicago, Illinois; two granddaughters: Caroline Benton Hale and Stephanie Griffin Hale of New Canaan, Connecticut; a sister: Martha Benton Flom of Edina, Minnesota; a nephew: R. Craig (Susan) Flom of Edina, Minnesota; and a niece: Sarah (Gary) Kiecker of Shorewood, Minnesota.

Katy was educated at Lawrence University and did graduate studies at the Medill School of Journalism at Northwestern University. She was a member of, and remained active in, Kappa Alpha Theta, the first greek-letter fraternity for women. She met her husband in Chicago, where Dr. Hale was attending Northwestern University School of Medicine. After Chicago, Katy lived with her husband in California, where he served as a physician at the Naval Hospital at Camp Pendleton, California. In 1950, Katy and her husband moved to Appleton and raised their family.

Katy was active in many civic organizations in Appleton, including the King's Daughter's Meals on Wheels Program, the AMC Hospital Auxiliary and the Visiting Nurses Association. She was a member of Riverview Country Club, Over the Teacups and several bridge clubs and book clubs. Katy enjoyed playing golf and tennis, traveling and spending summers and falls in Door County. She was a member of the First United Methodist Church in Appleton.

Online condolences may be expressed at www.wichmanfargo.com.

In lieu of flowers a memorial fund will be established in Katy's name. The family would like to extend a sincere thanks to nurses and care givers at Home Instead Senior Care and to the doctors, nurses and staff at the Appleton Medical Center.