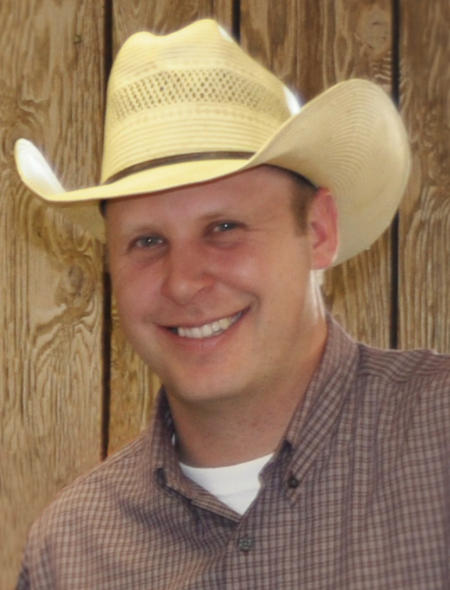 Karl Giacomini, age 36, passed away following an ATV accident near his home in Hortonville, Wisconsin on Friday July 20, 2013. Karl was born on March 9, 1977 in Eureka, California to proud parents Clint and Pam Giacomini. He grew up part of a large family involved in dairy farming and ranching in Humboldt County. Whether it was showing Jersey cows with Grandpa John, riding and roping with Grandpa Mickey, or hauling rodeo stock with his Dad, Karl never seemed to be very far from a cow or a horse. He was active in 4-H and FFA, graduating from Ferndale High School in 1996. He received a B.S. degree in Animal Science from Cal Poly, San Luis Obispo in 2000. He remained active in his support of his alma mater serving as a member of the Animal Sciences Advisory Council where he consulted on design of the Animal Nutrition Center, and was Treasurer of the rodeo boosters. Through his time from Humboldt County to Cal Poly he was blessed with a nucleus of great friends, all cowboys, who stayed close to this day.
Following graduation, Karl accepted a professional opportunity with Cargill Animal Nutrition. He advanced within the company and held positions from New York to California, most recently as Manager of the Cargill Feed Mill in Little Chute, Wisconsin. In an earlier Wisconsin assignment Karl met Stephanie Simonton and they were married on May 22, 2004. The newlyweds moved to the Central Valley of California and resided in Oakdale where Karl continued his career with Cargill. In 2010 Karl had an opportunity to manage a plant in Wisconsin so they moved back to be closer to Stephanie's family and to start one of their own. They were blessed with a daughter, Clara Rose, in 2011 and she will be joined by a sister due in September.
Karl is survived by his wife, Stephanie, and his daughter Clara. He is also survived by his mother, Pam Dillon of Eureka, California; sister, Tiffany (Dennis) Holmes of Escalon, California, and grandparents, Mickey and Elaine Dillon of Eureka, California.
He was preceded in death by his father, Clint, and grandparents John and Lois Giacomini.
The funeral liturgy for Karl will be held at 11:00 am on Friday, July 26, 2013 at St. Mary of the Immaculate Conception, N2385 Municipal Drive in Greenville, Wisconsin. A visitation will be held on Thursday at the Wichmann Funeral Home Tri-County Chapel from 4:30 pm until 7:30 pm and on Friday morning at the church from 9:30 am until the time of mass. A prayer service will be held at 7:30 pm on Thursday. An additional celebration of Karl's life for his California friends and family will be scheduled and announced at a later date.
In lieu of flowers, the family requests contributions to honor Karl's life are made to an educational fund established for the benefit of his daughters. Contributions payable to “Giacomini Girls' College Fund” may be sent c/o Bank Mutual, P.O. Box 45, New London WI 54961 or Redwood Capital Bank, 1075 S. Fortuna Blvd., Fortuna, CA 95540. Online condolences can be offered at www.wichmannfargo.com.
Karl was an example to everyone who knew him; be it as husband, father, brother, son, friend, or colleague. He touched many, and will be missed by all.