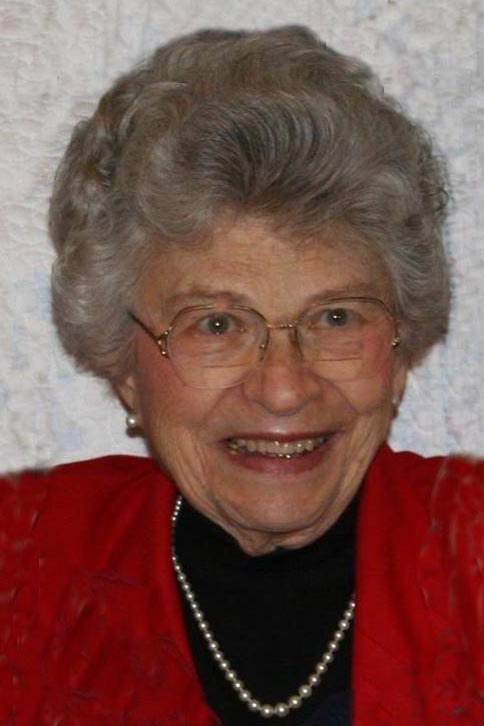 June S. Kaas, age 99, went to be with Jesus, her Lord and Savior, on March 25, 2016. She was surrounded by her family and passed peacefully from life at Appleton Medical Center.

June was born in Portland, Indiana – the first child of the late Samuel Glenn and Alice (Metzer) Shauver on July 18, 1916. At an early age, the family moved to Michigan. In 1934 she graduated from Burr Oak High School where she met her future husband Wayne L. Kaas (Dutch). They were married February 10, 1942. They enjoyed 46 years of marriage until Wayne's death in 1988. Shortly after they were married, they moved to Hillsdale, Michigan. Their daughter Martha (Marty) and son Richard (Dick) were born to them. June dedicated herself to raising her family, becoming involved in their activities. She served as a Campfire Girl leader for several years, and spent many cold winter mornings helping Dick with his paper route. While in Hillsdale she entered retail sales while Dutch supported the war effort by producing parts for aircraft engines.

In 1963 Dutch's job necessitated moving the family to Nashua, New Hampshire and two years later to Cherry Hill, New Jersey. During this time June was employed at Indian Head Bank in Nashua and PNC Bank in Cherry Hill. Their final move was to New Berlin, Wisconsin where Dutch continued to work into his 70's. Upon his death in 1988, she moved to Appleton to be near family, but also was able to spend fun summer months with her dear sister, Nancy, in Sturgis Michigan. She continued to enjoy life into her 90's, loving and caring for her family and extended family.

June attended Appleton Alliance Church, and her faith grew through the fellowship of her Bible study group. She enjoyed making counted cross stitch ornaments and other needlework. She was a wonderful cook, and knew everyone's favorite dishes. She was a devoted wife, mother, grandmother, great grandmother, sister, aunt and great aunt. Everyone who life brought under her wing experienced her love and concern.

Funeral services are scheduled for 11:00 AM on Saturday, April 2 at Appleton Alliance Church, 2693 W. Grand Chute Blvd., Pastor Dick Schaefer officiating. Visitation will begin at 9 AM and continue until the time of service. Burial will take place at Oak Lawn Cemetery Sturgis, Michigan.

Memorials may be made to Appleton Alliance Church, Community Hospice Foundation, or the American Heart Association.

The family would like to extend a sincere thank you to Dr. Jack Anderson, The Renaissance Assisted Living and Theda Care At Home Hospice. Your loving care and concern are deeply appreciated. You made everything so much easier for Mom and the family.