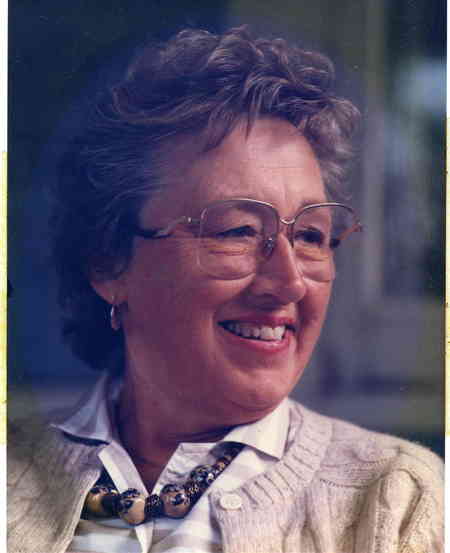 June Swanson Jones, age 89, passed away Sunday evening, June 28, 2009. June was born June 13, 1920 in Schenectady, New York to the late Carl and Mae Swanson. June attended The University of Vermont, where she earned her business degree in 1942 in Secretarial Science. In her earlier years, she worked as an executive secretary for General Electric in Schenectady, New York where she met the love of her life Houston Jones. They were united in marriage on February 22, 1947 and enjoyed 57 wonderful years together, until his passing on April 25, 2004. They lived in Chesterfield MO for 29 years before moving to Appleton WI in 2002 to be closer to family.
June was an intelligent, active, and creative woman with an eye for beauty. Her wide variety of interests and activities included sewing, quilting, oil painting, and membership in book clubs and investment clubs. She and her husband shared a love of golf, playing cards with friends, classical music, and opera. June entertained regularly with grace and ease, making her home a welcoming place for friends and family. For all her adult life, June was an active member of her sorority, Kappa Alpha Theta, fully participating in the activities of the local chapter wherever she lived and volunteering in many Theta projects to benefit those in need. Many other organizations in the various towns where June has lived have also benefited from June's efforts as a volunteer including the LPGA Tournaments at Forest Hills Country Club in Chesterfield, MO. June was adventurous as a hiker, camper, and world traveler who appreciated the natural world. June was a loving and faithful wife, mother, and grandmother who will be deeply missed.
June is survived by her daughter: Nathalie Jones (David Low) of Comox, British Columbia, Canada; two sons: Gregory (Linda) Jones, of Madison, and Ronald (Nancy) Jones, of Appleton; 7 grandchildren: Artos (Sue) and Brook (Riann) Low, Louise, Corrina, Jennifer, Laura (Kenny) Leonard, and Eric (Erika) Jones; one great-grandson: Simon Low; and other friends and relatives.
In addition to her parents, and husband, June was predeceased by her sister, Virginia Bard.
A Memorial Service for June will be held at 2:00 P.M., Sunday, August 9, 2009 at PRINCE OF PEACE LUTHERAN CHURCH, 2330 East Calumet Street, Appleton, Grandson, Eric Jones will officiate.
June's family would like to extend heartfelt thanks to the staff and caregivers at Brewster Village and Touchmark for all the care and support they provided June in her later life. A memorial fund will be established in June's name for Brewster Village Long Term Care Facility in Appleton.