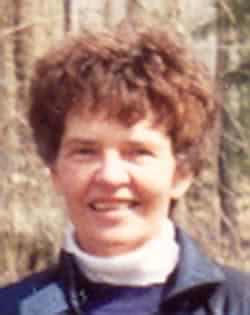 Age 65, passed away on March 11, 2003, following a courageous battle with cancer. She died peacefully at home with her family by her side. June was born on June 4, 1937 in Marshfield, WI, daughter of the late Hugo and Elsie (Lutz) Welk. She attended Marshfield schools and the University of Wisconsin, Eau Claire. On June 9, 1958, June married Nicholas Schnoebelen in Marshfield. June devoted her time to being a full-time mother to her two daughters Kathy and Joanie. The family lived in Rio for four years, Madison for two years and La Crosse for 23 years. In La Crosse, June had been employed as an executive secretary at Trane Company and also served as the administrative secretary for the Special Education Department for the School System of La Crosse for over four years. A career change relocated the Schnoebelens to Appleton in 1985. June worked part time in the Kaukauna Area School District as a secretary. June's hobbies included working with computers, spreadsheets, databases, word processors, and the internet. She also had a great love of music and played the piano extensively. However, her family and their activities were always her main concern.

June is survived by her husband, Nick and her two daughters: Kathy Boldt and June's granddaughters Lindsey and Kelly and son-in-law David Boldt, all of Madison; and Joanie Villers and her husband Dale Villers and June's grandchildren: Nick, Nicole, and Sarah Villers, all of Algoma. June is further survived by her sister and husband Verna and Snick Quicker and nephew David Quicker, all of Altoona; and her sister-in-law Anne Schnoebelen and her husband John Meixner of Houston, TX.

The family will be conducting a private prayer service in June's memory. In lieu of flowers, memorials in June's name would be appreciated and sent to the funeral home.

The family wishes to pay special thanks to the American Cancer Society, the Theda Care Hospice Association, June's special nurse, Mary Brenzel, and all the wonderful hospice nurses who visited us. We also want to thank the Mike and Sue Heenan family and all of the special neighbors and friends who helped us through this difficult time.