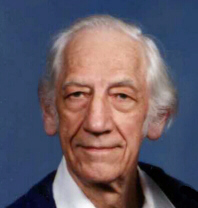 Julius John Martens, age 92, died Sunday, September 17, 2006 at St. Paul Elder Services in Kaukauna. He was born July 7, 1914 in Kaukauna, the youngest of three children born to Julius and Lillian (Mulholland) Martens. Jay graduated from Nicolet Grade School and Kaukauna High School. After high school he entered the University of Wisconsin, Madison and graduated with a degree in Business Administration and then returned home to work in his father‚Äôs Dry Goods store, J.J. Martens Co., Third Street, Kaukauna, WI where he met his future wife, Geraldine Eve Hentz. In 1942 he was drafted into the U.S. Army. After basic training at Fort Benning, GA, he served as a Master Sergeant in the Finance Department of the army in Sioux Falls, SD. On February 11, 1943 he married Geraldine Eve Hentz. In 1945, after his father‚Äôs death, he received an honorable discharge and returned home to manage J.J. Martens Co. He was an active member of the Kaukauna Chamber of Commerce and the Kaukauna Rotary.

Jay and his wife Gerry loved nature and the beauty of the Wisconsin woods and lakes. Listening to the owls hoot and watching the eagles soar over Thousand Islands were some of their greatest joys. One of their favorite pastimes was exploring the Wisconsin woods. Every Sunday throughout the summer and into the fall, Jay would consult his complete set of Wisconsin county road maps, pack up the wife and four kids, and plan a trip to some new and unexplored destination. For a week or two each summer, he would rent a cottage on Silver Bass Lake near Rhinelander, WI, where they would, canoe, hike, explore, and read comic books. For breakfast they would have cereal topped with wild blackberries that Gerry had picked in the woods. Jay taught the kids to catch perch and sunfish which Gerry would then cook for dinner. Killing song birds and frogs in the woods was off-limits though ‚Äì a lesson the three boys learned early in life.

Jay‚Äôs other main interests were science and technology which were also passed down to all of his children. After he retired from the store in 1973, he pursued a new career of tax consulting and became an avid student of computer technology. In the late 1980‚Äôs he learned Forth, a programming language, and used it to develop "DE-BOOKS", a bookkeeping program, which was published in the Jan/Feb 1990 issue of FORTH DIMENSIONS magazine. His love of nature, words of wisdom, and inquisitive mind will be remembered by many.

He was recently preceded in death by his wife, Geraldine Eve (Hentz) Martens on August 25, 2006, and two sisters: Alice (Martens) Young, and Helen (Martens) Ristau, and nephew: David Ristau.

A visitation will be held for Jay at 10:00 AM followed by a funeral service at 11:00 AM on Tuesday, September 26, 2006 at the Fargo Funeral Home, Kaukauna, with Fr. Jerry Pastors officiating. Burial will be in St. Mary‚Äôs Cemetery immediately after the service.

A memorial fund in Jay and Gerry Martens‚Äô name has been established for the Thousand Islands Environmental Center which promotes the ‚Äúappreciation of and involvement in nature by people of all ages.‚Äù