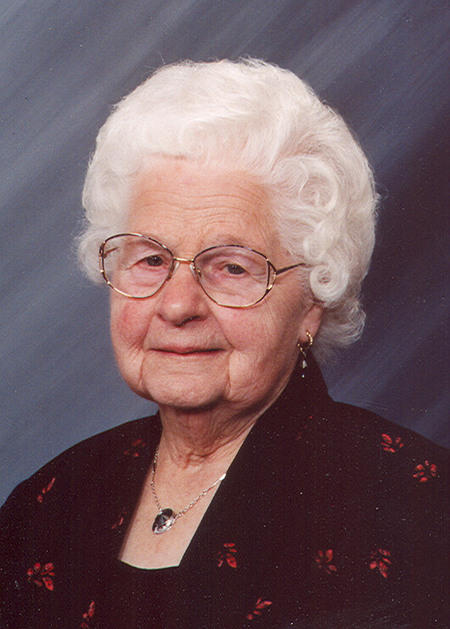 Vissers, Juliana N.
Juliana N. Vissers, 91, of Appleton, passed away on July 2, 2009 at Manor Care in Appleton. Juliana was born on March 30, 1918 in Appleton to the late Joseph and Julia (Becher) Stoffel. She grew up in the Appleton area and married Peter Vissers on June 3, 1942 at St. Joseph Catholic Church in Appleton. She and Peter farmed in the town of Center until his death in 1962. In 1972, she moved to Appleton where she lived for the next 34 years. To support her 5 children and later herself she did housework until she was 85. She never drove a car so she walked or took the bus. Juliana took loving care of her house, her yard, and loved to play sheepshead with family and friends. She had beautiful flowers, baked and cooked for her family on special occasions until she had a number of strokes that took her independence. She rallied numerous times until at last she prayed the Lord would take her home in her sleep. That wish was granted on July 2nd. Juliana was a wonderful mother, grandmother, and great-grandmother and is survived by 5 children; Carole (Terrance) Bergman, Appleton; Dorothy (Ralph) Sperl, Greenville; Thomas (Terry) Vissers, Kentland; Indiana, David (Ellen) Vissers, Appleton; and Richard “Rick” (Nadja) Vissers, New London. Grandchildren; Peter (Sara) Bergman, Jennifer (Tim) Westphal, Jason (Stacy) Bergman, Andrew (Rachel) Bergman, Christine (Stu) Voelz, Tammy (Dennis “Butch”)Coenen, Jaime Vissers, Erin (Tyler) Kosiorek, Joshua (Amanda) Vissers, Matthew (Nichole) Vissers, Luke (Jenny) Vissers, Benjamin (Michelle) Vissers, Anne, Dustin, Darin and Stephanie Vissers, 18 great-grandchildren; Jonah, Juliana, Hannah, Joel, Jared, Jacob, Jackson, Carter, McKenzee, Abraham, Twins Conner and Sophia, Zachary, Marissa, Lauren, Jarret, Reid and Walker, her sisters Mary (Louis) Neuman, Agnes (Larry) Van Heuklon and Marcella “Sally” (Elmer) Schroth, sisters-in-law; Grace (Henry) Vissers, Alice (Tony) Martinelli, many nieces, nephews, friends and a grade school and lifetime friend Ruby Kuchenbecker. Juliana was preceded in death by her husband and 3 sisters Beatrice Blazek, Lorraine “Ellie Blazek and Theresa Frahm, 3 brothers Joseph, George and Raymond Stoffel and a great-granddaughter Anabelle Bergman.
A Mass of Christian burial will be held on Sunday, July 5, 2009 at ST. THERESE CATHOLIC CHURCH, 213 E. Wisconsin Ave. Appleton, at 4:00 PM with Fr. William Hoffman officiating. Friends may call on Sunday from 2:00 PM until the time of Mass at the Church. Burial will be in the St. Nicholas Cemetery in Freedom. Memorials may be made to St. Therese Catholic Church. The family would like to extend a special thank you to Angelus Retirement Community and Manor Care for their wonderful care of Mom.
Thank you Mom for all your love and hard work. We will miss you terribly but will carry the memory of you in our heart until we meet again. Good-bye for now…
Wichmann Funeral Home
537 N. Superior St.
Appleton 739-1231
Online Condolences
www.wichmannfargo.com