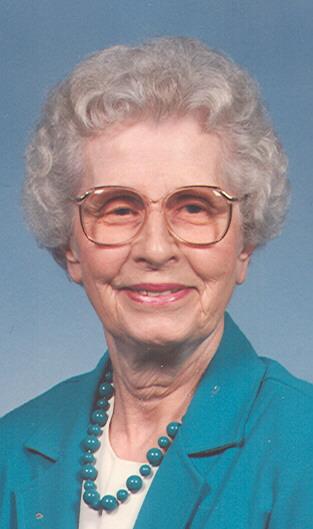 Julia D. Gloudemans went to the arms of her Lord on Sunday, August 27, 2006 at Brewster Village in Appleton. Julia was born on April 14, 1919 in Combined Locks, Wis. to the late William and Anna (Behling) Van Zeeland. She graduated from Appleton High School and earned a B.S. in Elementary Education from Wisconsin State Teachers College, Oshkosh. In addition, she did graduate course work at UW-Madison, UW-Oshkosh, and the University of Nevada. Julia was proud to be a member of Phi Delta Kappa, and a recipient of the Gamma Chapter Scholarship Award. She taught in the Laona, Combined Locks, Antigo and Appleton school systems. On July 21, 1945, Julie was united in marriage to Reginald Gloudemans at St. Paul‚Äôs Church in Combined Locks. They were members of Sacred Heart Parish since 1953 where Julie also taught school and tutored ESL students in reading after her retirement. She and Reg enjoyed 55 years of marriage until Reg‚Äôs death on Jan. 6, 2001.In addition to being an excellent cook, Julie loved crafts, especially needlework and quilting, and was a regular bowler for many years. She loved flowers and liked to make dried flower arrangements. During their retirement years, Julie and Reg enjoyed going out in their boat and fishing. Julia is survived by her children: Paul (Donna) Gloudemans, Fort Mill, S.C.; Louise (Jim) Zeller, Appleton; Jeff (Jean) Gloudemans, Kokomo, Ind.; and Eileen (Douglas) Thomas, Appleton; six grandchildren: Diana (Mark) Wolff, Laura Zeller, Chad and Ross Thomas, Kathryn and James Gloudemans. She is further survived by four sisters: Sr. Cecelia Van Zeeland, Chicago, Ill.; Ann Schneider, Kaukauna; Donata Wolfgram, Milwaukee; and Myra ( Russell) Dercks, Little Chute; three sisters-in-law: Ione Brecklin, Appleton; Elaine Doyle, La Habra, Cal.; and Dorothy Gloudemans, Little Chute; and many nieces and nephews. In addition to her parents and her husband, Julia was preceded in death by three sisters: Wilma Mitchell, Emily Berben, and Hildegarde Lamers; and four brothers Fred, Alois, William Jr., and Robert Van Zeeland. The family would like to thank all the caregivers and staff at Brewster Village (especially those in Gallery) and Golden Homes for the kindness they have shown in caring for Mother for the past 5 years. The Funeral Liturgy will be at 11:00 a.m. on Wednesday, August 30, 2006, at SACRED HEART CATHOLIC CHURCH, 222 East Fremont Street, Appleton, with Fr. Robert Karuhn officiating. Friends may call at the Wichmann Funeral Home, Appleton, on Tuesday from 5:00 p.m. until 8:00 p.m. and again directly at the church on Wednesday from 9:30 a.m. until the time of services. Entombment will be in Appleton Highland Memorial Park.