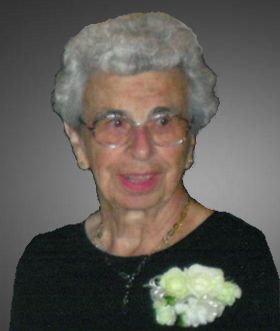 Joyce Catherine McLaughlin, age 89, of Kimberly, passed away peacefully with her family by her side on Saturday, June 9, 2018, at Brewster Village. Joyce was born on February 16, 1929, daughter of the late Louis and Veronica (Philippi) Kort. After graduating from Clintonville High School, she married Eugene (Mac) McLaughlin at St. Rose Catholic Church on June 12, 1948. Mac passed in 1996. Joyce enjoyed her work in sales at J.C. Penney, retiring after 29 years.

In Joyce’s younger years, she enjoyed shopping, going out to eat and road trips. She was an avid sports fan who loved to watch the Packers and the Brewers. However, the Kimberly Papermakers were her favorite sports team. She stayed active supporting her children and grandchildren by attending many games. In her later years she became a “snow bird” who traveled to Texas during the winters with her brother. She cherished her time attending to her family and spending time with her grandchildren.

The memorial service for Joyce will be held at 11:00 a.m. on Saturday, June 16, 2018, at the JANSEN FARGO FUNERAL HOME, 204 E. Kimberly Ave, Kimberly, with Pastor Ralph Hanusa officiating. A time of visitation will be held from 10:00 a.m. until the time of service. The inurnment will follow at Holy Name Cemetery. Online condolences may be expressed at www.wichmannfargo.com.

Joyce’s family would like to thank Rosanne, Cindy and the rest of the staff at Brewster Village for their kind and compassionate care. And also a very special thank you to Gloria Ott for her many visits, treats and support.