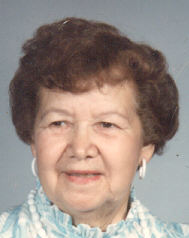 Age 81, passed away Wednesday, February 19, 2003 after a brief illness. Josephine was born in Oneida on January 4, 1921, daughter of the late Albert and Josephine (Skenadore) Vanden Bloomer. ON June 1, 1937 she married Henry Fox in Oneida; he preceded her in death. For many years she worked as a housekeeper at several private homes, as well as at St. Elizabeth Hospital and Parkside Care Center. In her younger years, she enjoyed hunting and fishing, and also looked forward to frequent trips to the casino. Many will remember her love for playing cards; she was always ready for a game of sheephead or cribbage.

The funeral liturgy for Josephine will be held on Friday, February 21, 2003 at 3:00 PM at HOLY CROSS CATHOLIC CHURCH, 309 Desnoyer Street in Kaukauna with Fr. Jim Lucas officiating. Interment will be in the parish cemetery. Friends may call directly at the church on Friday from 1:00 PM until the hour of the service.