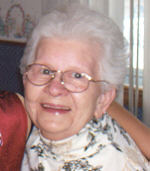 Age 87, passed away peacefully surrounded by her family at Cherry Meadows in Appleton on Saturday, July 12, 2008. She was born the youngest of 15 children in Sleepy Hollow, Kaukauna on July 20, 1920 the daughter of the late Joseph and Hannah (Auden) Nushart. In 1937 she married her husband of 37 years, Elmer Granger. He preceded her in death in 1974. Josie was well known for being a head cook for Kaukauna Community Hospital for 10 years and for St. Al's hot lunch program for over 30 years until her retirement in 1995. She was known as the “Queen of the Kitchen.” Josie was always proud of her “Kids” at St. Al's and they new her through their nickname of “Honey” or a hug.

Josie will be missed by her children: Robert Granger, Ronald “Red” (Colleen) Granger, Raymond (Mary) Granger and Sue (Dan) Desotell; grandchildren: Greg, Gary, Todd, Tiffany, Brian, Kelly, Scott, Mike, Lisa, Amy and Becky; and 12 great-grandchildren. She was preceded in death by her 14 brothers and sisters, and a daughter-in-law, Carol.

The funeral liturgy will be at 11:00 a.m. on Tuesday, July 15, 2008 at St. Katharine Drexel Parish, ST. MARY'S SITE, 119 W. Seventh St., Kaukauna, with Rev. Jerry Pastors officiating. Friends will be received at the church on Tuesday from 9:00 a.m. until the time of the service. Burial will be in St. Mary Cemetery, Kaukauna.

The family extends a special thank you to the staff at Appleton Medical Center and especially to Cherry Meadows Hospice for their wonderful care and thoughtfulness.

In lieu of flowers, a memorial fund in Josie's name is being established.