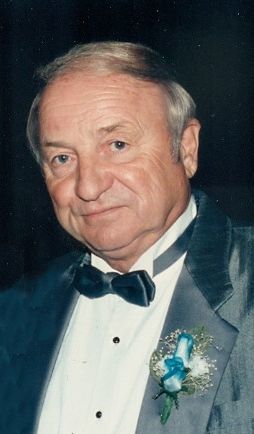 Joseph “Joddy” Jansen, age 86, of Kaukauna, passed away with his family at his side Saturday, May 14, 2016. He was born January 19, 1930 in Combined Locks to the late George and Josephine (Wildenberg) Jansen. He graduated from Kimberly High School in 1948. Joddy proudly served his country in the U.S. Army as a sergeant with the 3rd Infantry Division, in Korea from 1951-1953.
He married the love of his life, Nancy Mayer on September 10, 1955 and they were blessed with three sons; James, Scot, and Jay.
Joddy was employed at Appleton Papers, Lox Mill in the power plant for forty-three years before his retirement in 1991. He was a member of the Lox Mill Quarter Century Club.
In his earlier years he enjoyed playing golf with Nancy, his sons, grandsons, friends and as well as being on several golf leagues. Joddy loved nature, his garden and flowers and especially cutting the lawn on his rider. He also was an avid reader. His greatest joy was spending time with his seven grandkids and nine great-grandkids.
Joddy is lovingly survived by his wife of sixty years, Nancy; his sons, Jim (Lois), Scot (Cindy) and Jay (Amy); his grandchildren, Jamie and her sons, Bradley and A.J. and daughter, Brooklyn; Eric and his son Braylon; Jeff and his son, Wesley; Randy (Kristy) and their sons, Trey and Logan; Katie and her son, Gavyn and daughter, Bradi; Kyle (girlfriend Dana) and Chad and sister-in-law, Janice Jansen. He is further survived by many nieces, nephews, other relatives and dear friends.
In addition to his parents, Joddy was preceded in death by his two brothers, Carl and Paul (Evelyn) Jansen and his father-in-law and mother-in-law, Corn and Helen Mayer.
A celebration of Joddy's life will be held Thursday, May 19, 2016 at 4:00 p.m. at FARGO FUNERAL HOME, 400 W. Wisconsin Street, Kaukauna. Visitation will be held Thursday at the funeral home starting at 1:00 p.m. until the time of the service. In lieu of flowers, memorials will be donated in Joddy's name. Online condolences can be offered at www.wichmanfargo.com.
Joddy's family would like to thank his care givers at ThedaCare-Appleton and Saint Paul Home-Kaukauna for all the compassionate care given to him and his family.