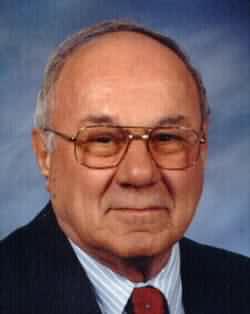 Joseph J. Pitsch, 76, of Appleton, passed away at home on Saturday, September
25, 2004 after a courageous battle with cancer. He died at home surrounded by
the love of his wife Dorothy, ten children, twenty five grandchildren and six
great-grandchildren.

Joe was born August 1, 1928 in Sheboygan, WI to Joseph E. and Margaret
(Altenberger) Pitsch. He graduated from Kiel High School in 1946. On November
26, 1949 he married Dorothy Matthias at St. Wendel Catholic Church in
Cleveland, WI. He lived in Cleveland, WI, Appleton, WI and Sycamore, IL, where
he worked in automotive and agribusiness sales. He was also a band leader and
drummer with various dance bands.

Joe is survived by his sisters: Marian (Fritz) Hertel; Delores (Elroy)
Biederwolf; Irene Davis; and Carolyn (Ignatius) Gorenc. He is further survived
by his sisters-in-law: Ruby Pitsch; Evelyn Kraft; and Gloria (Donald) Hopf. He
is also survived by his brothers-in-law, Bart (Betty) and Willard (Alice)
Matthias.

He was preceded in death by his parents; his brother, Ralph Pitsch; brothers-in-
law: Richard Davis; Bob O‚ÄôBrien; Elroy and Merlin Matthias; and sisters-in-law,
Jeanette and Sadie Matthias.

The Mass of Christian Burial will be celebrated at 11:00 a.m., on Thursday,
September 30, 2004 at ST. BERNARD CATHOLIC CHURCH, 1617 West Pine Street,
Appleton, with Rev. John P. Bergstadt officiating. Family and friends may call
at the funeral home on Wednesday, September 29 from 4 until 8 p.m., and again
at the church on Thursday, from 10:00 until 10:45 a.m. A Prayer Service will
be held at the funeral home on Wednesday, at 7:00 p.m. The interment will be
held at St. Mary Catholic Cemetery, Appleton.

The family wishes to express their heartfelt gratitude to Dr. Robert Geller and
staff at Fox Valley Hematology and Oncology, Home Instead Senior Care, and
Heartland Hospice Services.

When tomorrow starts without me, and I am not here to see,
If the sun should rise and find your eyes all filled with tears for me.

I know how much you love me as much as I love you,
And each time you think of me, I know you‚Äôll miss me too.

But when tomorrow starts without me please try to understand,
That Jesus came and called my name and took me by the hand.