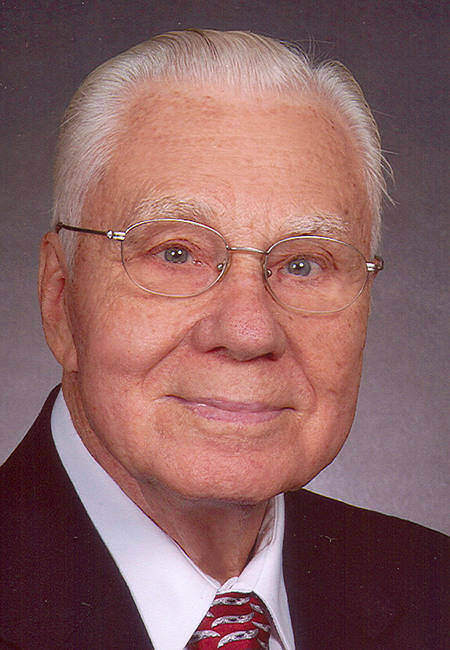 Joe was born March 2, 1920, in Freedom, the son of John “Jack” and Rose (Green) Van Hoof. He attended the Kaukauna Trade School, where he gained knowledge in machine tool and die making, engineering and planning. He was a veteran of World War II, serving in the United States Navy at Great Lakes, Illinois. Joe was united in marriage to Catherine W. “Katie” School at St. Joseph Catholic Church, Appleton, on October 16, 1954. She survives. Prior to his retirement, Joe was employed with Brillion Iron Works for over 40 years as their in house sales coordinator. He was a member of the American Foundrymens' Society.
Joe and Katie moved in 1954 to be a part of the storybook community of Hollandtown. They were long-time parishioners of St. Francis Catholic Church, and Joe was a former member of the Knights of Columbus. He was a member and secretary for the Hollandtown Sanitary Planning District since its inception.
Joe was an absolute gun advocate-he was a member of the National Rifle Association, enjoyed deer hunting and was an avid shooter. Each year the citizens of Hollandtown gather to participate in their annual Schut, and Joe would intentionally avoid winning the tourney. He also took pride in the restoration of muzzleloaders.
Joe was a voracious reader and a great historian, and his family and friends will miss his precious insights.
Survivors include his wife, Catherine “Katie”; his children, Dennis (Jean) Van Hoof, and their two children, Mike and Katie, Sheboygan, Mary Borree, and her son, Max, Point Pleasant, N.J., Jim Van Hoof, and his children, Hannah and Joe, Hollandtown, Sue (Dan) Voet, and their children, Jack and Mary, Kaukauna, and Joan Van Hoof, Menasha; three sisters and a brother, Lillian (Tony) Van Wychen, Kaukauna, Don Van Hoof, Kaukauna, Ann DeCoster, Little Chute, and Marian Ragen, Kaukauna; two sisters-in-law, Liz Van Hoof, Little Chute, and Grace School, Appleton. He is further survived by numerous nieces and nephews.
Joe was preceded in death by his parents, a brother, Norbert, and brothers-in-law, Larry DeCoster and Ronald “Red” Ragen.
The funeral mass will be celebrated at 5:00 p.m. Monday, July 14, 2008, at ST. KATHERINE DREXEL CATHOLIC CHURCH, St. Francis Site, 433 CTH CE, Hollandtown, with Father Marty Fox as celebrant. Burial will be in the parish cemetery. Visitation will begin at 2:00 p.m. Monday at the church until the time of the mass.
A memorial fund is being established in his name.
The family would like to express their deepest thanks to Joe's special caregiver and friend, Ellen “Ellie” Scheibe, ThedaCare at Home Hospice, and the entire Hollandtown community for the love and support given to them the past several months.