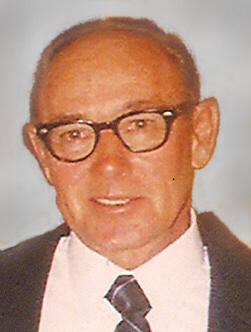 Joseph Gerrits, age 83, of Appleton, passed away at St. Elizabeth Hospital, Appleton, on October 10, 2010. Joe was born on December 28, 1926, in Kimberly to the late Martin and Odelia (Verhagen) Gerrits. He was employed as a painter at Omni Glass and Paint for over 24 years and was member of the Painter Union, Local #145. Joe proudly served his country in the United States Army. Joseph enjoyed fishing, hunting, the outdoors, bowling, and cribbage and horseshoes at Jerry Kamps. Survivors include his daughters, Tammy (Robert) Corey, Greenleaf; Debbie (Al) Lindsey, Appleton; his son, Robert (Sheri) Kraus, Appleton; his grandchildren, Chad Kraus, Jeff (Heather) Kraus, Matthew (Jenni) Corey, and Tyler Corey (fiancé Christina); his great grandson, Jayden Kraus; his brother, Vern (Mary) Gerrits; and his brother-in-law, Corey Van Boxtel. He was preceded in death by his brothers and sisters, Lucy (Ray) Montonati, Alice (Bill) Jansen, Clarence (Millie) Gerrits, Marge (Lloyd) Schmitt, Cecelia (Martin) Van Beck, Martha (Ed) Janssen, Wilbert (Rosella) Gerrits and Betty Van Boxtel. Funeral services will be at 4:30 p.m. on Thursday, October 14, 2010 at JANSEN FARGO FUNERAL HOME, Kimberly. The visitation will be on Thursday from 2:30 p.m. until the time of services. The family would like to extend a sincere thank you to the nurses at St. Elizabeth Hospital on the fourth floor, the staff at Colony Oaks Care Center, and to Amber Jochem, for their loving care.