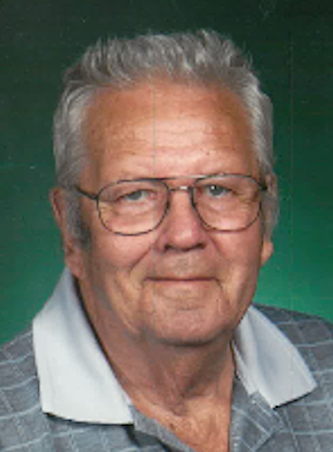 Joe Young, age 85 of Kaukauna, was called home by his loving wife Marie, early on Friday morning, September 7, 2018, at St. Elizabeth Hospital in Appleton. Now Joe and Marie are playing Yahtzee together again. Joe was born in Wrightstown on January 31, 1933, son of the late Joseph and Norma Young, Sr. He attended vocational school, and on February 10, 1951, married Marie Summers. She preceded him in death in August of 2011.

A lifetime area resident, Joe worked at Thilmany for over forty years. However, he also had many side jobs, including making soda pop for a local bottling company, helping out at Carlton Schmitt’s store, fixing motors, and was even a part time delivery driver for area drug stores. Joe was an avid hunter and fisherman who always seemed to be on the go. He loved chatting on his CB radio, his handle was The Lizard. He loved to tell his favorite jokes, enjoyed spending time on the swing outside, eating chocolate, spending time with his dog Twinkie, and collecting thrift store trinkets such as M & M items and Avon bottles. His all-time favorite saying was, “Go ask mom.” After Marie passed in 2011, he missed her dearly.

Funeral services for Joe will be held at 4:00 PM on Tuesday, September 11, 2018 at IMMANUEL UNITED CHURCH OF CHRIST, 510 Sullivan Avenue in Kaukauna, with Rev. Lynn Martin officiating. Interment will take place in Union Cemetery. Family and friends are invited to gather at the church on Tuesday afternoon from 2:00 PM until the time of the service.

The family would like to extend their special thanks to Dave and Barb Drewa for all they did for Joe, as well as to everyone at St. Paul Elder Services, especially on Poppy Path. He truly flourished during his short stay. Finally, to Kate and Kaylie, our special angels at St Elizabeth Hospital. We will never forget your kindness.