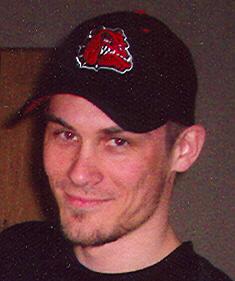 Joseph E. Pontow, age 28, of Oshkosh, died unexpectedly, Friday, July 6, 2007. He was born October 16, 1978, in Appleton, where he was a resident until moving to Oshkosh 8 months ago. Joe served with the U. S. Marine Corps from 1997 ‚Äì 2002 and presently had been attending Fox Valley Technical College. Joe was an avid outdoorsman, and he also enjoyed personal time with his computer and video games. He is survived by his wife Rebecca R. (Knudsen) Pontow, whom he married February 14, 2006; his children, Kayson and Joseph; his mother, Mary (James) Bleck, Appleton; sisters, Sheila Thomas, Appleton; Nichole (Dan) Kersten, Appleton; step-brothers, Justin Bleck, Hortonville; Dale (Vicki) Bleck, Shawano; his mother-in-law, Vicki Luckow, Oshkosh; many nieces and nephews, other relative and friends. He was preceded in death by his step-brother, James A. Bleck, Jr., February 4, 2006. Funeral services for Joseph will be held at 4:00pm, Wednesday, July 11, 2007, at the funeral home, with Reverend David Skarsten officiating. Burial will be in Appleton Highland Memorial Park. Friends may call at the funeral home from 1 – 4 pm, Wednesday. In lieu of flowers a memorial fund is being established.

Joe was a loving, caring person who enjoyed spending time with his family, especially his sons.