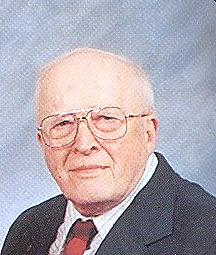 Joseph E. Heimmermann, age 86, passed away on Thursday, July 19, 2012 at the Wisconsin Veterans Home, King. Joe was born on April 25, 1926 in Appleton, son of the late Joseph Sr. and Agnes (Alesch) Heimmermann. Joe proudly served his country in the United States Army overseas during World War II. On October 13, 1953, he was married to Myrtle Peters at St. Francis Catholic Church in Hollandtown. For most of his career, he worked as a pressman at Banta Corportation in Menasha.

A Mass of Christian Burial for Joe will be held at 11:00 a.m. on Wednesday, July 25, 2012 at ST. BERNADETTE CATHOLIC CHURCH, 2331 E. Lourdes Dr., Appleton, with Fr. Don Zuleger officiating. Friends may call on Wednesday at church from 9:30 a.m. until the time of the mass. Interment will take place at Holy Name Cemetery, Kimberly.