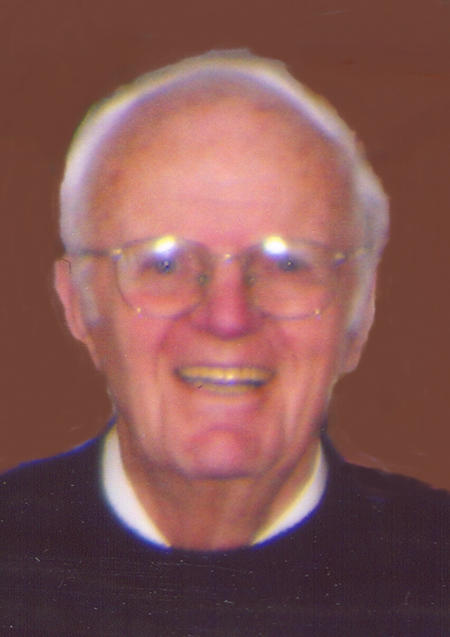 Joe Van Dam, age 88, passed away Tuesday morning, December 6, 2011 at Theda Clark Hospital in Neenah. In January of 1923, his parents and two older brothers emigrated here from Holland, and Joe was born on March 21, of that same year. He attended the Algoma High School, where he excelled in sports, drama, and music. Until the age of 28, Joe worked for his father at Van Dam & Sons Feed Mill, and then entered the United States Navy where he served as a Seabee. On May 7, 1949, he married Gerry, and the couple was blessed with sixty-two years together. Joe worked at Square D in Milwaukee and resided in Grafton from 1951 until 1972. He then became the head of maintenance and the safety director at JI Case in Winneconne where he worked for sixteen years, retiring in 1986. In his retirement, he operated J and G Enterprises, maintenance, remodeling, and carpentry service. Joe enjoyed working in his woodshop, fishing and RVing. His favorite sayings were, “Who needs a hobby when you have an RV,” and “Getting old ain't for sissies!” Joe was also grateful to make connections with his heritage and family members on a trip to Holland in 2004.

The funeral liturgy for Joe will be held at 12:00 Noon on Saturday, December 10, 2011 at ST. MARY CATHOLIC CHURCH, 312 S. State Street in Appleton, with Fr. Jim Leary, OFM Cap. officiating. Burial will take place at St. Mary's Cemetery in Algoma at a later date. Friends may call at the church on Saturday morning from 9:00 AM until the hour of the service. A memorial fund in Joe's name is being established.

Joe loved his family and they were his life. His passing leaves a hole in our hearts and he will be greatly missed. We love you.