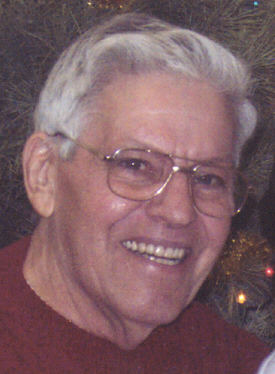 John Merckx, of McFarland, formerly of Kimberly, age 72, passed away on Wednesday, March 7, 2007 at UW-Hospital, Madison. He was born October 19, 1934 in Kaukauna, the son of the late August and Gabriel Merckx. John married Evelyn Alt on December 3, 1976 in Belleville, Wisconsin.

Dad fought a rare blood condition day by day, week by week and year by year and yet, he rolled with the punches and never backed down to this disease. We witnessed a man with great courage accepting each battle thrown at him and each time he came out a winner. Our Dad‚Äôs positive attitude and love for his family was no match for this terrible disease. His sense of humor and will to live was our inspiration that we will carry with us the rest of our lives.

The funeral liturgy for John will be held at 10:00 a.m. on Saturday, March 17, 2007 at HOLY CROSS CATHOLIC CHURCH, 309 Desnoyer St., Kaukauna with Fr. Jack Mullarkey officiating. Inurnment will take place at the parish cemetery. Friends may call at the church on Saturday from 8:30 a.m. until the time of mass. In lieu of flowers, a memorial fund will be established in his name.

The family would like to thank the Oncology Unit, all of the doctors, nurses and aids at the University Hospital in Madison, especially every one on 6th floor. A special thanks goes to Dr. Ann McBride, who was his primary doctor and a person he thought the world of.

He lived life to the fullest. Tim McGraw wrote a song ‚ÄúLive Like You Were Dying‚Äù. Dad did just that and he had the chance to leave on his terms with dignity and grace surrounded by his family. I hope we all get the chance to live like we were dying the way our old man did.

Dad, you taught us well.