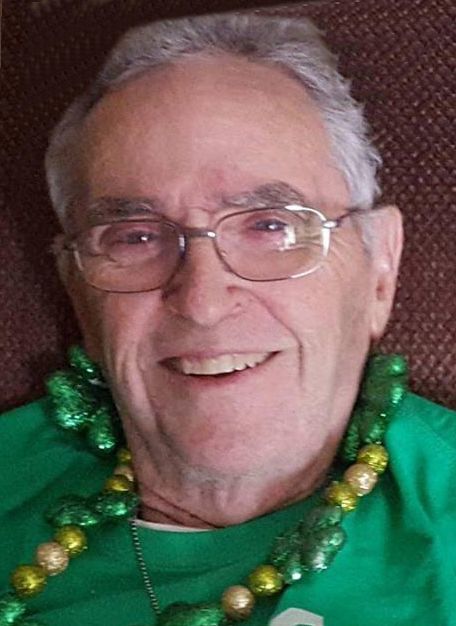 John Sheridan Spalding, age 87, passed away peacefully April 17, 2017 at Appleton Medical Center. He was born December 13, 1929, In Marshfield, WI to Thomas and Helen (Flannigan) Spalding as the youngest of eight children. John Graduated from St. Mary's Central High School, Class of 1947. He furthered his education as a graduate of St. John's University, Collegeville, MN in 1951 with a B.S. in Biology. He proudly served in the US Army stationed in San Francisco in the Counter Intelligence Corps.

John married Patricia Marie Killoren on Nov 8, 1952 and the couple had nine children. While raising their family, John and Pat formed many lifelong friendships. They were longtime members of St Patrick's church located in their hometown of Menasha, WI. Sadly, Pat passed away in 1993.

John was an active businessman involved in many ventures. Close friends jokingly referred to he and his brother-in-law, Don Killoren's interests as “finger-in-the-pie industries”. John and Don first became partners at Killoren Electric. They later started and developed several businesses including Midwest Telephone Supply, Midwest Mainline, and Valley School Supply now known as School Specialty. During his years of involvement in the telephone supply industry; John was president of the United States Telecommunication Suppliers Association. He was inducted into the Wisconsin State Telephone Association Hall of Fame; his entire family was present to cheer for their dad!

John's success in business should not be attributed only to his acumen but also to his Christian faith. Most of John's business deals were done with a handshake. Part of his success can be attributed to his love of seeing other people succeed. He helped many young business people with his insights simply by engaging them in casual conversation and offering his personal encouragement.

As a result of John and Don Killoren's business success, the partners were able to build K&S Game Farm, in Shiocton, WI. The game farm was a source of pride and pleasure for Don and John, where customers, family, friends, organizations, and schools came to enjoy the outdoors.

John possessed a huge heart. He loved to give whenever he could and found many causes he actively supported. He helped his longtime friend and neighbor, Ralph McClone; develop the 1000 Yarders Youth football program in Menasha. Many kids in the fox cities got their first taste of football because of this program. An avid hunter, John was a Duck's Unlimited Sponsor, and Founding member of Winnegamie Wetlands. As a Trout's Unlimited sponsor John and Don put on an annual fishing outing at the family game farm trout pond. Always faithful to the Catholic Church, he was an active donor and fundraiser for Catholic Charities and the Twin Cities Catholic School System. Children's Hospital of Wisconsin, and many other great charities also found their way into John's generous spirit.

Outside of business, John was a great sports fan. He enjoyed watching college basketball, Brewer baseball, and his favorite, the Green Bay Packers. As a fan of the Packers, John was able to turn his passion into a part time job. He was the team's sideline statistician for Packer home games from the early sixties to the late eighties. He was also able to have the coaches and players out to the game farm for hunting, fishing, and relaxing for many years.

John was fortunate to once again find love. He and Peggy Kostelnik were married on August 4th, 1995. The wedding, held at the family game farm, was a joyful occasion for both families. Over the years, the couple has lived in Greenleaf and Menasha, Wisconsin; wintering in Longboat Key, Florida. Always a Packer fan, John managed to return to Lambeau for nearly every home game.

John touched many lives and he appreciated every friendship he had. Many people from near and far will miss him.

The family would like to thank the great staff members of Appleton Medical Center, Brewster Village and Touchmark where he resided.

A Resurrection Mass for John will be Saturday, April 22 at 11 am at St. Patrick Catholic Church, 324 Nicolet Blvd, Menasha with Father Bob Kabat officiating. Visitation will be from 9 am until time of Mass at 11 am.

In lieu of flowers please make donations to Children's Hospital of NE Wisconsin or your favorite charity in John's name.