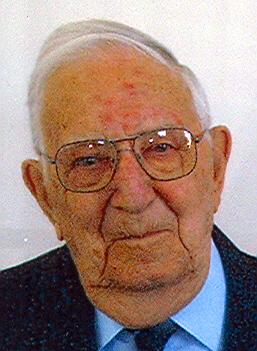 Age 100, passed away peacefully on Tuesday, March 30, 2004 at Rennes Health Care Center. John was born on October 28, 1903, to the late Libbie and Irvin Newbury in Wheatland Township, Kenosha County, WI (Burlington, WI). He married Edna A. Dilge on May 28, 1938, in Tigerton, WI. John graduated from Burlington High School in 1926 and Lawrence College in 1930. He was a member of Phi Kappa Tau, where he actively served on the board of directors and was the local treasurer. He owned and operated Appleton Paper Products, a paper box factory, in Appleton from 1936 to 1964 when he retired. He was a charter member of Appleton Evening Lions Club and it‚Äôs treasurer for 19 years. John served as a director of the Wisconsin Lions Foundation for 6 years, and also transported eye tissue for the Lions Eye Bank. He was a member of Grace Lutheran Church, Appleton, and drove for FISH and the Visually Impaired Persons (V.I.P.s).
Survivors include his wife Edna, Appleton, and daughters Nancy (Don) Luetschwager, West Bend, WI, Sandra (Michael) Yerxa, Greenville, WI; grandchildren Lori Luetschwager, West Bend, and her son Josiah Behmke; Jon (Beth) Luetschwager, Cumming, GA, and their children Rachael, Megan, and Michael; Tim Luetschwager, West Bend; 1st Lt. USAF Gregory Yerxa, Goldsboro, NC; 1st Lt. USAF Christian Yerxa, Reno, NV. John is also survived by nieces, nephews, and cousins. He was preceded in death by his parents, his sisters Gertrude (Oscar) Uebele and Ruth (Ted) Lathrope.
John was an avid gardener for many years. He claimed to be a charter member of the Burlington Liars Club. John greatly enjoyed visiting with many friends and relatives at his 100th birthday party last October!
Funeral services will be conducted on Saturday, April 3, 2004 at 11:00 AM at Grace Lutheran Church, 900 North Mason Street with the Rev. Judy Deckert officiating. Friends may call at the church on Saturday from 9:00 AM until the time of the services. In lieu of flowers, a memorial fund is being established. The family wishes to express their special thanks to the caring and loving staff at Rennes.