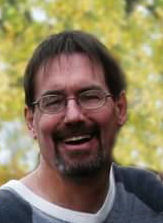 John R. Hudson II, age 51, of Kimberly, went to the arms of his Heavenly Father after a long and courageous battle with cancer on Monday, June 5, 2017. He was born in Beloit, Wisconsin to John R. I and Rachel Ann (Bowers) Hudson. John graduated from F. J. Turner High School in Beloit and shortly after he joined the U.S. Navy. John proudly served his county for the next four years.
As fate would have it John's path crossed with his high school sweetheart, Richelle Loescher. The two were married on April 26, 2013, and from that point on they were inseparable.
John was employed as a header operator at Luvata in Appleton. He took great pride in his work there but more importantly he made a family of friends.
John was a goofy guy with amazing wit and a crazy sense of humor. In recent years he picked up antiquing and particularly looked for any items with “Hudson” on them. He was known in the subdivision for his bonfires, which he enjoyed with his brother Mark; he even had a drawer in the house with saved items for burning (aka the burn drawer). He loved gardening and working in the yard and he even enjoyed walks around the neighborhood with his wife. He loved animals and especially small dogs for their big personalities. Most recently John and his brother-in-law, Grant were able to go to a Packers Game—surely a day neither of them forgot. In 2017 John and Richelle went to the Journey Concert in Green Bay.
John leaves behind the love of his life, Richelle Hudson; his parents, John I and Ann Hudson, his son, John R. Hudson III; step-sons, Robert Vereecken, Sam Salamone and Seth Salamone; his brother, Mark (Donna) Hudson; his mother-in-law, Mavis Loescher and his brothers-in-law, Grant Loescher and Randy (Kathy) Loescher and sister-in-law, Robin (Bill) Osness. John is further survived by nieces, nephews, other relatives and dear friends.
He was preceded in death by his father-in-law, George Loescher.
A Celebration of John's life will be held at People's Church in Beloit Wisconsin on Thursday, June 22, 2017, with the visitation starting at 6:00pm and the service at 7:00pm. In lieu of flowers, a memorial fund will be established in John's name. Online condolences can be made at www.wichmannfargo.com.