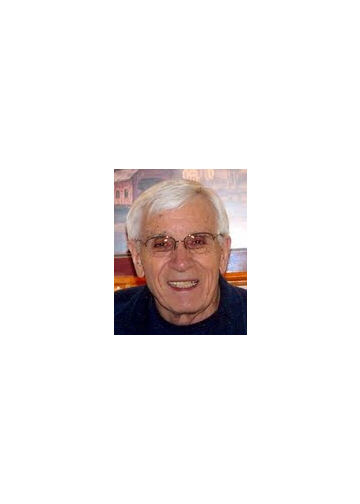 John M. Aman, age 79, of Kaukauna, died unexpectedly on May 4, 2011. He was born on June 17, 1931 in Holmes Township, Michigan, the son of the late Mike and Anna (Mathias) Aman. John married Sharon Arnold on October 25, 1958 in Powers, Michigan.
John was a loving husband, proud Dad, and an amazing Grandpa. One of his greatest joys was attending his grandchildren's many sporting events and musical endeavors. He also enjoyed spending time at the cabin in Michigan with his family. John enjoyed hunting, fishing, and relaxing by the camp fire with his family. He was an avid reader of non-fiction, a frequent visitor of the Kaukauna Library. During John's younger years, he was an outstanding first baseman and signed with the Boston Red Sox Minor League. John proudly served our country in the Korean War from 1948 to 1952. He was a member of the Jacob Coppus American Legion Post # 258, of Little Chute. He was the President of the Kaukauna Credit Union for 23 years and retired in 1993.
John was a member of St Luke Evangelical Lutheran Church for over 40 years and served as Treasurer for many years.
John is survived by his wife of 52 years, Sharon; two daughters, Vicki Aman (special friend, Paul Reese), and Jan (Jim) Hietpas; two sons, Paul (Paula) Aman, and Gary (Patty) Aman. John's greatest joys in his life were his six grandchildren, Kinleigh and Lydia Hietpas, Nicholas and Ryan Aman, and Katie and Haley Aman. John is further survived by his two brothers, Bill Aman , Michael (Margie) Aman; three sisters, Genevieve Mueller, Lorraine (Miron) Drum, and Betty (Robert) Klitzke; and an uncle; Vincent Aman. John is further survived by five brothers ‚Äìin-law, Glenn Arnold, Edward (Yvonne) Arnold, Douglas (Dorothy) Arnold, Phillip (Janie) Arnold, and Robert (June) Arnold; three sisters ‚Äìin ‚Äì law, Joan (William) Daniels, Mary (Tony) Larsen, and Eunice Arnold. John is also survived by many nieces and nephews. John was preceded in death by his parents, brother-in-law Edward Mueller, and Sharon's parents (Ida and William Arnold), brother and sister-in-laws Orville Arnold, Bill and Donna Arnold, Joe Arnold, Verna and Bill Nelsen, Betty and Howard Lacosse.
Memorial service will be held at 12:00 pm on Saturday May 7, 2011 at ST. LUKE EV. LUTHERAN CHURCH, 705 Greenfield Drive, Little Chute, with Rev. Ronald Szep officiating. Visitation will begin at 10:00 am until the hour of service. Military honors will be provided by Jacob Coppus American Legion post #258.
In lieu of flowers, a memorial has been established.
Dad, you were such an inspiration to us in your kind and gentle way. You taught us to love and respect nature and to take time to enjoy the little things in life. You are at peace now and we will hold you in our hearts forever.
Grandpa, you were always there to cheer us on in everything we did. Your encouragement and loving words inspired us to chase after our dreams. We will cherish the time we shared and love you always.
Fargo funeral Home
400 W. Wisconsin Ave
Kaukauna, WI
(920) 766-6200
Online condolences
www.wichmannfargo.com