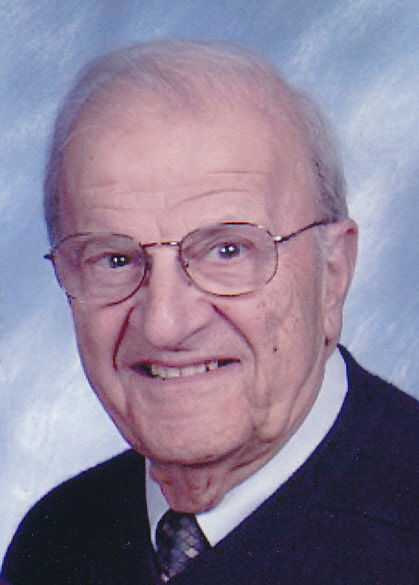 John James Rouman, age 90, passed into eternal life on February 16, 2013 at his home. John was born in Tomahawk, Wisconsin on January 18, 1923, the only child of Greek Immigrants James and Chrisula Rouman. He graduated from Tomahawk High School and attended Ripon College before enlisting in the United States Army. He proudly served in the 95th Infantry Division and prior to being shipped to the European theatre, attended the University of Pittsburgh. He saw action as a rifleman along with ROTC students attached to General Patton's army. When the hostilities had ceased, John attended the Warton Technical School in Blackpool, England. After being honorably discharged from the service, he returned to Ripon College and under a combined plan with the Massachusetts Institute of Technology, he received a Civil and Structural degree, as well as a degree in mathematics and physics from Ripon College.

The paper industry in Wisconsin was John's goal, and he became employed by Orbison and Orbison Consulting Engineers of Appleton. In 1951, John had an opportunity to return to graduate school at M.I.T. to get involved in structural pre-cast and pre-stressed concrete design. To fill his academic schedule, he chose highway and airport design.

After a short stay in Tucson, Arizona, John returned to Appleton and was employed by Combined Locks Paper Company, presently known as Appleton Coated. In 1954, he was promoted to Chief Engineer and along with a plant in Roaring Spring, Pennsylvania, he experienced twenty-four years in the paper industry.

In 1975, John founded J.J. Rouman and Associates Engineers and Architects and with industrial and structural background got involved with pre-cast and pre-stressed concrete projects. The first being Pacon, followed by Voith, Paper Valley Hotel, White clover Dairy, and Crystal Print.

John and Ezzy enjoyed vacationing in Siesta Keys, Sarasota, Florida, Canada, the Caribbean, the Greek Islands, and Alaska, as well as many trips to the family cottage in Tomahawk.

The funeral liturgy for John will be held at 11:00 AM on Wednesday, February 20, 2013, at ALL SAINTS EPISCOPAL CHURCH, the family's place of worship for many years. Fr. Patrick Twomey will officiate. Friends may call at the Wichmann Funeral Home in Appleton on Tuesday from 4:00 PM until 6:00 PM, and again at the church on Wednesday from 10:00 AM until the hour of the service.

Online condolences may be offered at www.wichmannfargo.com, and in lieu of flowers direct memorials to: Theda Care at Home, Honor Flight Network, or All Saints Episcopal Church.