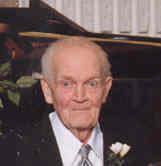 John H. Jansen
‚ÄòSpooner‚Äô
Age 77, of Appleton, passed away at Franciscan Care Center on August 25, 2003 after a short illness with cancer. John was born to the late John and Elizabeth (Servaes) Jansen in Little Chute on November 7, 1925. He entered the U.S. Army National Guard in 1948 and was honorably discharged in 1955. John worked at Pierce Manufacturing for 48 years, welding and completing the fire trucks. On June 22, 1973 John married Shirley (Werner) Hintz and they enjoyed over 30 years together. Spooner's interests included: hunting, fishing, playing cards and watching football, especially the Packers. He also enjoyed spending time with his pets.

He was preceded in death by his parents, 12 brothers and sisters, and a son-in-law, Gary Van Den Broek.

Funeral Services will be held on Thursday, August 28, 2003 at 7:00 PM at the funeral home, with Pastor Jerry Hubert officiating. Visitation will begin at 4:00 PM until the time of services. Entombment will take place at Highland Memorial Park, Appleton. A memorial fund is being established.