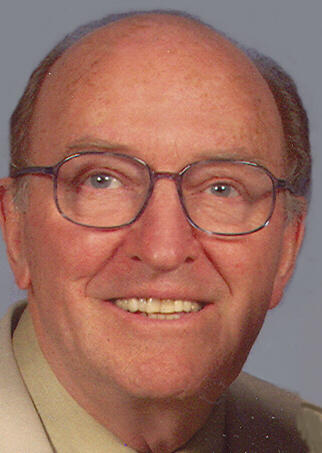 John Donald Dyer, 87, of Appleton, died Thursday, November 25, 2010 at Brewster Village. He was born September 4, 1923 in Toronto, Canada. John was the son of the late George and Pauline (Tripplehorn) Dyer. He married Jewel Verhulst on May 3, 1947. John was general manager of the Oshkosh Container Division Plant of Georgia-Pacific Corporation in Oshkosh. He was a graduate of Lawrence College (Lawrence University), and earned his M.B.A. from the University of Chicago.

He served with the army in Europe during World War II and was a member of the Veterans of the Battle of the Bulge. John was awarded both the Bronze Star Medal and the Purple Heart.

Much of his activity in the Oshkosh area was in fund raising. He was general chairman of the Citizen's Committee for funding the Congressman William A. Steiger Memorial Wing of the Oshkosh Public Museum. He was special gifts chairman during the rebuilding of the Salvation Army in Oshkosh. In addition, he was a trustee and chairman of the board of Wayland Academy, Beaver Dam, Wisconsin, as well as trustee of Carroll College (Carroll University), in Waukesha, Wisconsin.

The memorial service for John will be held at 2:00 pm on Wednesday, December 1, 2010 at WICHMANN FUNERAL HOME with Pastor David Rosene officiating. Inurnment will take place at Riverside Cemetery, Appleton. The family will receive friends from 1:00 pm until the time of service.