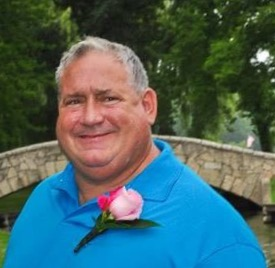 John A. Kersten, age 55, of Kaukauna, passed away unexpectedly in Appleton, on Sunday, April 19, 2015. John was born on August 5, 1959, in Neenah, to the late Richard and Rita (Schedgick) Kersten. He married his Lover Girl, Cindy, on August 23, 2014.
John was employed by P.H. Glatfelter for more than 25 years, retiring in 2002. His passion was ice boating. John was the World Champion Ice Boater in 1987, 1988, and 1989 in boats he both designed and built. He also served as Vice-President of the Neenah Ice Yacht Club. His enjoyment of fireworks led him to his Class A Pyrotechnic Technicians License. He designed and was involved with many major pyrotechnic displays in the Valley over the years. Christmas was a favorite time for John and his lighting displays were spectacular and enjoyed by all. In addition to being a well-known woodworker and craftsman, John was a true craftsman and “fixer” of almost anything. He was an avid Packer fan, enjoyed camping and spending time at Mountain, Wisconsin, but most of all enjoyed the time spent with his family.
Survivors include his wife, Cindy and beloved dog, Lexie; his children, Melissa (Steve) Jahnke; Pamela Kersten; Diana (Paul) Kersten; and Daniel Kersten; his grandchildren and great grandchildren; his siblings, Patricia (Bob) Salzman, Dianna (Greg) Simon; Nancy (Gene) Lenhardt; Gerard (Margaret) Kersten; Mary (Willy) Schroeder and Joey (Ann) Kersten; his sisters-in-law, Louise Kersten, Penny (Pete) Brockman, Jo (Joe) Pritzl, and Tammy (Mike) Thyssen. He is further survived by many nieces, nephews, other relatives and friends. John was preceded in death by his brothers, John, Michael and Richard Kersten, and his sisters, Marilyn, Karin and Jacqueline Kersten.
Memorial services will be at 4:00 p.m. on Saturday, April 25, 2015, at WICHMANN FUNERAL HOME—TRI-COUNTY CHAPEL, 1592 Oneida Street, Menasha, with Pastor Vicki Simon and daughter Melissa officiating. Friends may call directly at the funeral home on Saturday from 1:00 p.m. to the time of services. In lieu of flowers, a memorial has been established in his name. Online condolences may be offered at www.wichmannfargo.com