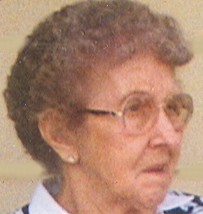 Johanna Hakkert, age 91, passed away peacefully on August 28, 2007 at St. Paul Home in Kaukauna. Johanna was born March 1, 1916 in Kimberly, daughter of the late Simon and Cornelia (Van Hest) Roovers. Prior to her marriage, Johanna was employed for a time by the Kimberly Clark Mill in Kimberly. In October of 1957, she married Jake Hakkert; he preceded her in death in 1991. Johanna was a member of Holy Spirit Parish in Kimberly, American Legion Ladies Auxiliary, and the Golden Agers. She was also an avid card and bingo player. Most of all, she enjoyed visitors in her home. A very appreciative hostess, she was always sure to thank her visitors and to welcome them back anytime. She will also be fondly remembered for her love of decorating for each holiday. She had decorations stored in every nook and cranny, and eagerly awaited the next holiday season to change the d√©cor.

Johanna is survived by a brother: Peter (Dorothy) Roovers of Kimberly; three sisters-in-law: Minnie Wulterkens of Appleton, Jackie Ebben of Little Chute, and Lena (Bob) Polakowski of Kimberly; a brother-in-law: John (Mary Ann) Hakkert of Appleton; as well as her dear friends from the Monroe Street apartments in Little Chute, which include Betty, Sylvia, Honey, and Elsie. There are also many nieces, nephews, other relatives, and friends. Johanna was preceded in death by her parents, her husband; sisters Marie (George) Ottenschot, Catherine (George) Nabbefeld, and Louise (James) Heinemann; an infant brother George; a brother George (Myrtle) Roovers; brothers-in-law: Harry Wulterkens and Richard Ebben; and a sister-in-law: Christine (Richard) DeCoster.

The funeral liturgy for Johanna will be held at 11:00 AM on Thursday, August 30, 2007 at HOLY SPIRIT PARISH ‚Äì KIMBERLY, 600 E. Kimberly Avenue, with Fr. Kenneth Frozena officiating. Interment will be in St. John Cemetery, Little Chute. Friends may call directly at the church on Thursday morning from 9:00 AM until the time of the services.