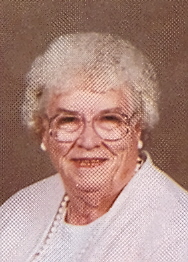 Johanna Frances Portmann, age 86, of Kimberly, passed away Thursday afternoon, October 1, 2009 at Colony Oaks Care Center after a lengthy illness. A lifelong resident of Kimberly and a faithful member of Holy Spirit Parish, Johanna was born on August 14, 1923 to the late Gerardus and Marie (Koeberg) Werts.

On May 9, 1946 Johanna was united in marriage to Paul Portmann at Holy Name of Jesus, Kimberly. They had three daughters: Mary Lou (Mark) Condon, of Madison, Barbara J. (Carl) Tank, of Appleton, and Paula A. Portmann, of Kimberly. In addition to her daughters, she is further survived by four grandchildren: David (Shelley) Tank, Tammy (Paul) Huebner, Sean Condon, and Ryan (fiancée Katie Bohren) Condon; four great-grandchildren: Lance and Ellie Huebner, Devin and Rachel Tank; and a sister-in-law, Faye Portmann, of Trempealeau.

In addition to her beloved husband, Paul, Johanna was preceded in death by her sister, Mary Werts.

A Funeral Liturgy for Johanna will be held at 11:30 a.m. Monday, October 5, 2009 at HOLY SPIRIT PARISH, 600 E. Kimberly Ave, Kimberly. Fr. David Beaudry and Msghr. John Schuh will celebrate the mass. A time of visitation and support will be held at the church on Monday from 9:00 a.m. until the time of service. Following the service, Johanna will be laid to rest next to her husband at Holy Name Cemetery, Kimberly.

Johanna's family would like to extend a heartfelt thank you to Linda Minten, her personal caregiver, the staff and caregivers at Colony Oaks Care Center, especially, Lauri, Jean, and Bella, who always made her smile, and Theda Care Hospice, for all their wonderful care and support. Sincere gratitude to Clyde and Joan Schumacher for their constant love and support.