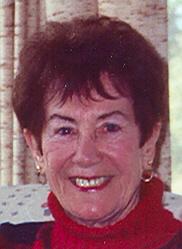 Joanne M. Bay, age 75, died Friday evening, September 1, 2006, at Manor Care Health Services. She was born May 19, 1931, to the late George and Marie (Dolan) Barton, in Wabasha, MN and served with the U. S. Army during the Korean Conflict and was stationed in Yokahama, Japan. Joanne married Walter T. Bay in Neenah; he preceded her in death on October 12, 1985. She had been employed by Gilbert Paper for many years. Joanne was a member of St. Thomas Episcopal Church, Neenah and she volunteered at the Salvation Army, the Theda Clark Women‚Äôs Auxiliary and St. Thomas Episcopal Church. She is survived by her sister, Patricia Jackson, Wabasha, MN; two nieces, Roxanne (Michael) Sturm, Menasha; Jacqueline (Mike) Lidgerding, Wabasha, MN; three nephews, James (Beth) Wanek, Larson; Guy (Julie) Jackson, Winona, MN; and Eric Jenson, Wautoma, WI. She was preceded in death by a sister, Peggy Wanek-Jenson and a brother, Donald Barton. The funeral service for Joanne will be held at 12:30 pm, Wednesday, September 6, 2006, at ST. THOMAS EPISCOPAL CHURCH, 226 Washington Street, Menasha, with Father Ed Smith officiating. Burial will be in Oak Hill Cemetery. Friends may call at the church on Wednesday, from 11:30 am, until the time of the service. In lieu of flowers a memorial fund has been established for Theda Clark to aid stroke victims.

The family would like to thank the staff of Manor Care and a special thank you to Dottie Kraus of Theda Clark.