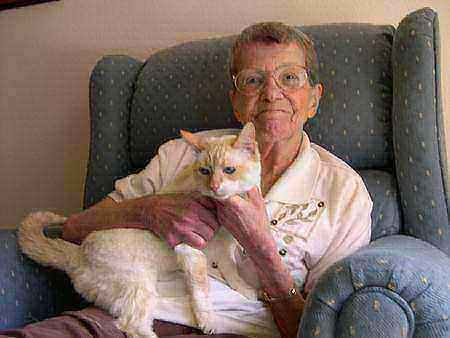 Joan Milske, age 81, of Kimberly, died on Monday, September 3, 2007, at St. Elizabeth Hospital. Joan was born on March 12, 1926, in Sheboygan, to the late Geoffrey and Muriel (Evans) Patrie. She married James Milske on March 17, 1955, in Manitowoc; he preceded her in death on June 3, 1995. Joan enjoyed animals, crossword puzzles, reading, crocheting, traveling with her husband, and the Arts. She was a volunteer at the Fox Valley Humane Society and was a former dancer with the Chicago Opera Ballet. She especially enjoyed the time spent with her grandchildren. Survivors include her son, Gary (Kathy) Milske, Kimberly; her daughter, Jodi (Bill Rice) Milske, Forestville; her daughter, Patti (Dan) Dow, Marion; her son, Steven (Sharon) Milske, Greenville; her grandchildren, Milt, Jim, Ryan, Allison, Paige, Steven, Grace, Claire, Benjamin and Samuel; her great grandchildren, Bo, Remington and Nolan; her brother, David (Sigi) Patrie, Fort Payne, Alabama; and many nieces, nephews, other relatives and friends. Joan is further survived by her best friend of 16 years, her cat Zoe. She was preceded in death by her son, Guy, and her nephew, Kevin. Memorial services will be at 4:00 p.m. on Friday, September 7, 2007, at the WICHMANN FUNERAL HOME, Appleton, with Pastor Jill Meyer officiating. Friends may call directly at the funeral home on Friday from 3:00 p.m. until the time of services. A memorial has been established in Joan‚Äôs name to benefit the Fox Valley Humane Society. The family would like to extend a sincere thank you to the staff of St. Elizabeth Hospital for their loving care.