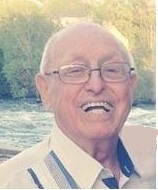 Jimmie Cutler was called home and into the arms of his loving Lord Tuesday, November 17, 2015 at the age of 89. He was being cared for at the home of his daughter and son-in-law's family in Las Vegas, Nevada for the past two months.

Jim was born in DuQuoin, Illinois on April 16, 1926, son of the late Ralph and Violet (Moss) Cutler. He served for two years in the Navy on the USS Woodford, an amphibious assault ship, during WWII and participated in the invasion of Okinawa. Once he returned from serving his country, he worked various jobs, including coal mining, before becoming a master plumber.

On July 19, 1958, Jim married Betty Leinwander at St. Paul Ev. Lutheran Church in Appleton and the couple owned and operated Cutler Plumbing & Heating, which was based in Neenah/Menasha. After he retired and sold the plumbing business, he worked part time for both Imperial Limousine and Wichmann Funeral Home because he LOVED TO DRIVE!

Jim was a faithful and active member of St. Paul, serving on various committees including President of the congregation and co-chairman of the church's Easter breakfast. He was also very active in the community, especially sports. He was on the Appleton Foxes Board of Directors for many years and served as Vice-President of the Midwest League for ten years. Many will also remember his participation with various bowling, curling and golf leagues and the Badger Bums Campers. Once his daughters were born and followed in their parents' athletic footsteps, he became involved in both the St. Paul Falcons and Fox Valley Lutheran Foxes athletic programs. “Mr. C.” as he was fondly called, was Head Coach of the St Paul Girls A squad basketball team and was official scorekeeper of the boys' teams for many years. At FVL, Jim was a visiting elder and both he and Betty worked several years with FVL's Fans of the Foxes, being honored together by FVL at the Red Smith Banquet in the 1980's. Once his two grandchildren came along, he enjoyed watching them grow and followed all their activities. During their retired years, Jim and Betty wintered in South Texas in their fifth wheel until Betty's health declined.

After Betty passed away, he moved to the Greenwood Village Condo complex and became involved in their daily activities, including starting up their happy hour gatherings. He also met a fantastic woman, Shirley Verhagen, who made him very happy these last few years. Jim also loved to sing, bicycle, make wine and cook, especially his mostaccioli dish. By the way, did we say HE LOVED TO DRIVE? Dad always made friends wherever he went and his smile will be missed!

He is survived by his two daughters: Karen (Bill) Drecktrah of Appleton and Casey (Kyle) Korth of Las Vegas; two grandchildren: Dylan (fianceé Erica Smit) Korth and Kendall Korth; a sister: Joan Dibeneditto of Evansville, Illinois; his special friend: Shirley Verhagen; as well as many nieces, nephews, other relatives and friends.

The Christian Funeral for Jimmie will be held at 11:00 AM on Tuesday, December 8, 2015 at ST. PAUL EV. LUTHERAN CHURCH, 302 N. Morrison Street in Appleton, with the Rev. Kenneth Frey officiating. Military honors will follow, and entombment will be in Highland Memorial Park.

The family will receive relatives and friends at Wichmann Funeral Home, 537 N. Superior Street on Monday, December 7 from 4:00 PM until 8:00 PM and at the church on Tuesday morning from 9:00 AM until the hour of services. A memorial fund is being established in Jim's name. For more information or to share a memory of Jim, please visit www.wichmannfargo.com.

We would like to extend special thanks to all his friends at the Greenwood Village Condo Complex who kept an eye on Dad these last few years. (We know Happy Hours haven't been the same). Also thanks to those who took care of him this past year.

Casey, Kyle, Dylan & Kendall – Thank you all so much for taking care of Dad in your home these past two months. -Karen & Bill

Kyle – I especially want to thank you for all the loving help you gave me caring for Dad these past two months. -Love Casey