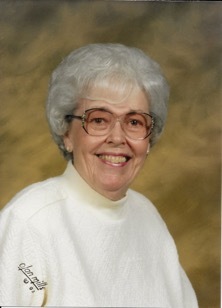 After attending Stephens College in Missouri for one year, she transferred to Lawrence College (University) where she went on to receive her Bachelor of Science Degree in 1946. While at Lawrence, she was a member of Kappa Alpha Theta sorority and was president of her senior class. Jewel ran against her future husband for this post!
Jewel worked at the Kohler Company and the Boston Store (Milwaukee). She also was employed at the Wisconsin Telephone Company where she was in the engineering department.

After growing up in Sheboygan, her adult years were spent living in Wilmette (Illinois), Oshkosh, Wautoma, Baileys Harbor, and Appleton. John and Jewel enjoyed winters in Vero Beach, Florida, for twenty-five years. In Florida they were members of Westminster Presbyterian Church. While in Florida they spent many happy hours square dancing (and round dancing) with their dear friends.

Jewel was engaged in civic affairs. She was active in the Oshkosh YMCA fund drives and was a member of P.E.O. and Curative Workshop where she served the organization as president. She served on the board of the Easter Seal Society and volunteered at the EAA Museum during fly-in weeks. Furthermore, she worked with the Red Cross and the Winnebago County Mental Health Hospital.

Jewel was predeceased by her husband, John, and her son, Jack. She is survived by her daughters Denise (Dick) Haight, Daryl (Donnie) Slye, and Debby Dyer. She is also survived by four grandchildren: Mike (Cory) Haight, Erin (Josh) Chudacoff, Rebecca Slye, and Jimmy (Erica) Slye. Additional survivors include four great-grandchildren: Lillie and Cameron Chudacoff, and Emily and Allison Haight.

The memorial service for Jewel will be held at 2:00 p.m. on Thursday, October 27, 2016 at Wichmann Funeral Home, 537 N. Superior St. Appleton, with Pastor David Rosene officiating. Inurnment will take place at Riverside Cemetery, Appleton. The family will receive friends from 1:00 p.m. until the time of service.

Jewel's family would like to thank the staff at Brewster Village and Touchmark Senior Living for their kind, compassionate care.