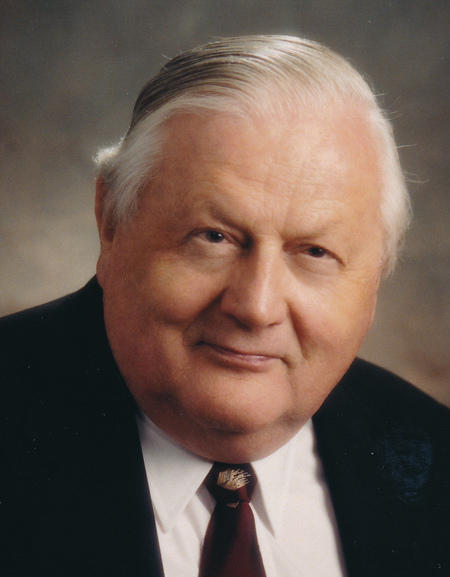 Jerome Norval “Jerry” Otteson, age 86, passed away on Friday, August 17, 2012, at Cherry Meadows. He was born on August 7, 1926, in Starbuck, Minnesota, the son of the late Norval and Clara (Sandvig) Otteson. Jerry was united in to marriage Bernice Myhra in 1949; she preceded him in December of 1963. He then was married to Donna Cameron on April 3, 1965, in West Fargo, North Dakota. Jerry worked for Cutco Cutlery for over 60 years, hosting one of his last sales just weeks ago. He was a sales representative doing door to door sales, moving up to division manager and motivational speaker for the company. Jerry was a member of Rotary for 28 years, on the board of directors of Villa Phoenix for 13 years, a member of Sons of Norway, and very active for many years at Trinity Lutheran Church where he was a member on several boards. Jerry was once named the Monopoly game Champion of Wisconsin. His real passion was traveling the world; it was a great hobby of his, visiting different countries.
Jerry is survived by seven daughters, Debby (Mark Rehak) Otteson, Redgranite, Heidi (Kenneth Kalz) O'Brien, Port Clinton, OH, Becky Van Gompel, Little Chute, Lori Quistad, Satellite Beach, Fla., Toni (Robin) Pitman, London, Ontario, Canada, Stacey Otteson, Appleton, and Patti Jo (David) Walter, Two Rivers; there are 12 grandchildren and nine great grandchildren, one sister, Doris Bakken, Minnesota, further survived by nieces, nephews and dear friends. Jerry was preceded in death by his wife, Bernice and his wife Donna, infant daughter Laurel, son-in-law, Bruce Quistad, infant grandson, Chase Weiland, and one infant brother.
Memorial services for Jerry will be held at 11:00 a.m. Tuesday, August 21, 2012, at Appleton Alliance Church, 2693 West Grand Chute Blvd, with Rev. Dennis Episcopo officiating. Friends and family may call on Monday, August 20, 2012, at Wichmann Funeral Home, 537 North Superior Street, from 5:00 p.m. until 7:00 p.m. and at the church on Tuesday from 9:00 a.m. until the time of service. A memorial is being established.
Online condolences may be expressed at www.wichmannfargo.com
The family would like to extend a special thank you to all of Jerry's dear friends who supported Jerry over the past few months. Thank you to the staff at St. paul's Home in Kaukauna, the ICU nurses at Appleton Medical Center and all the staff at Cherry Meadows. Your wonderful care, comfort, and support will never be forgotten.