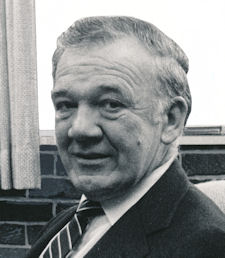 Jerome L. Schnettler passed away in Appleton, Wisconsin on December 26, 2011 after a long and tedious battle with Alzheimer's disease. He was the beloved husband and best friend of Joan (Bersch) Schnettler, whom he married 63 years ago at St. Dominic's Church in Sheboygan, Wisconsin.

Born in Sheboygan, on November 25, 1926 to Nick and Helen (Burkart) Schnettler, Jerry graduated from Sheboygan North High School in 1945. He enlisted in the U.S. Air Force in April 1945 as a Pilot Training Candidate, training at Sheppard Field, Texas and Lowry Field, Colorado, and received an Honorable Discharge in August of 1945 at the conclusion of World War II. Following his discharge, Jerry enrolled in the Milwaukee School of Engineering (MSOE), and graduated in March of 1950 with a B.S. degree in Electrical Engineering.

As an Electrical Engineer with Milwaukee Electric Tool Corporation (METCO), Jerry enjoyed a long and prosperous career. Initially hired as a New Product Designer in 1952, he quickly advanced to Assistant Chief Engineer and was eventually promoted to V.P. of Engineering, V.P. of Operations, Executive V.P., and was ultimately named President in April of 1983. During his tenure at METCO, he also acted as a Vice President of Amstar Corporation in New York, N.Y. and as President of Milford Mfg. Company in New Haven, Connecticut. Employing his background as a licensed Professional Engineer in the state of Wisconsin, he successfully represented METCO in numerous Product Liability Cases. After retiring as President, Jerry continued to serve on the Board of Directors and was elected Chairman on September 1, 1991. In recognition of his vast accomplishments and contributions to the power tool industry, which included eight United States Patents in power tool design, he was elected to the Power Tool Institute's Hall of Fame in 2001.

In his free time, Jerry enjoyed serving on the Board of Directors at his alma mater, MSOE, and was a member of the school's Horizon Club. He was an avid golfer, and was the proud owner of four holes-in-one. He developed a love and appreciation of art, specializing in oil painting, and produced a large collection of beautiful pieces which will be enjoyed by his family for years to come.

In the 14 years following Jerry's retirement, Joan and he spent the winter seasons at Loblolly Pines in Hobe Sound, Florida and their summers at a lake home in Minocqua, Wisconsin. In May of 2008, they moved to Touchmark in Appleton, and Jerry became a resident of Heartwood Homes Senior Living in March of 2011.

He was preceded in death by two dearly beloved sons, Daniel Schnettler of Lawrence, Kansas and Hans Schnettler of Highlands Ranch, Colorado. Also, his parents Nick and Helen Schnettler, three brothers: Nicholas, Robert and William Schnettler and his sister, Marion Wagner and numerous other relatives.

The funeral liturgy for Jerome will be held at 10:30 am on Saturday, January 7, 2012 at ST. BERNARD CATHOLIC CHURCH, 1617 W. Pine Street, Appleton. Fr. Dennis Ryan will be officiating. The family will receive relatives and friends at the church from 9:00 am until time of mass. Inurnment will take place on a future date in Plum Lake Cemetery, Sayner, Wisconsin.

The family wishes to thank the Staff at Heartwood Homes Senior Living for the loving care they gave Jerry for the past ten months.

In lieu of flowers, memorials would be appreciated to the Fox Valley Warming Shelter, St. Elizabeth Hospital in Appleton, or the Catholic Foundation for the Diocese of Green Bay.