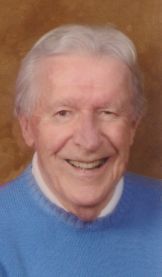 At 2:30 a.m. on Saturday, December 6, 2014, our Lord–with outstretched arms and filled with great compassion– welcomed to Heaven our husband, father and grandfather, Jerry. Our Lord provided Jerry to arrive with great peace and dignity.

God blessed each of us with tremendous strength and presence, as the unfathomable disease known as Parkinson's slowly pulled Jerry from us and all that brought him joy.

Jerry was born in Merrill to Arthur and Esther Boettcher on September 10, 1932. He attended Trinity Lutheran School in Merrill; followed by attendance of Merrill High School where he graduated with honors in 1950. While there Jerry was active in debate, choir, drama, baseball and football. He then moved forward to the University of Wisconsin Stevens Point. Jerry graduated in 1954 with a teaching degree. While there, he was a four year member of the Men's Glee Club. Jerry was active in the drama club and the fraternity Sigma Phi Epsilon.

In college he met his future wife, Carol Harder of Amherst. They were married on August 25, 1956. Jerry and Carol raised two children, Jeff of Appleton and Julee of Madison. He then attended UW-Wisconsin, graduating with honors in Education Administration in 1962.

Jerry volunteered to serve in our Nation's Army. He served in the Army Security Agency in the United States Alaska from 1954-1956. Jerry was tremendously proud of his service, yet unable to discuss his endeavors for many years.

He then taught in the Antigo Middle/High Schools from 1956-1957. Jerry then transferred to Brookfield Central, where he was the Department Head from 1957-1963. Moving forward, he became Assistant Principal at Brookfield East from 1963-1966.

In 1966 Jerry was offered the opportunity to become principal of Appleton West High School. It was with great pride and strength that he embraced this new challenge. It was a turbulent time in the world, yet he made it his mission that every student and teacher would be empowered and lifted up to their individual level of greatness. His strength of character drew students to him. They embraced his smiles, laughter, and belief in each one who passed through the doors of the school.

Jerry was always in the hallways during passing times, talking, joking, and celebrating his kids. He walked to school every day; typically not alone, as students parked near his home. Some would wait for him as he made his way to West. It was his dignity and positive nature that endeared him to so many. Jerry was principal from 1966-1971. A portrait of Jerry is displayed on the Appleton West wall of Honor.

In 1971 he was asked to become the Appleton School District Deputy Superintendent. Jerry remained in that position from 1971-1991. He loved the opportunity to bring new teachers to the district, while uplifting those who had a long history in the schools. Jerry would visit the schools regularly. The children and their enthusiasm was his treasure. No matter his position, his door was always open. He was ready to listen, mentor, advise and empower.

Jerry retired, deciding to celebrate life with his wife Carol. They travelled extensively throughout the United States, Great Britain, Norway, Sweden, Austria, Switzerland, Italy, Newfoundland, and all the Canadian provinces.

Jerry loved Wisconsin and sharing it with his family. He loved fishing and was always willing to “wet a line” at any time. Jerry golfed often with his wife, friends and family. He always celebrated the opportunities presented to him.

Jerry loved reading, learning and sharing. His vast knowledge of history and Native American lore was outstanding and incredible. He loved watching the Badger's football and basketball teams, as well as the Green Bay Packers.

Jerry was a catalyst for opportunity and change. He was forefront when it was time to build new schools, when our nation's bicentennial approached. He was the Chairman—spearheading a log cabin built on the Franklin School Campus for teaching.
Jerry spent years in service to Faith Lutheran Church of Appleton, serving on committees and attending Bible studies.

He was an active member of the Fox Valley Kiwanis Club, even into his later years as a “Golden K” member. Jerry enjoyed his membership in the “Sons of Norway.” He also served as president for the Eagle River Lake Forest Resort and Condo Association.
Yet most importantly, Jerry loved his family. His laughter, smile, and warm embraces will be in our hearts forever. Family time was what mattered; time together to be cherished.

He is survived by his wife of 58 years, Carol; his son Jeff (Nancy) Boettcher; his daughter Julee (Paul) McVicker; his grandchildren: Colin (Kirsten) Steinke, CJ (Kandice) Boettcher, Kathy (Kaffers) Boettcher and Ashley (Brian) Carr; his two great grandchildren, Brielle and Luca Carr; a brother-in-law Rev. John (Ruthe) Harder and their son Paul (Nellie) Harder and their children Hannah and Elizabeth; as well as many dear friends.

Jerry was preceded in death by his parents Arthur and Esther Boettcher and his brothers, Jim and Bruce.

Memorial services for Jerry will be at 2:30 p.m. on Saturday, December 13, 2014, at FAITH LUTHERAN CHURCH, 601 E Glendale Avenue, Appleton, with Rev. Dan Thews and Rev. Paul Brinkman officiating. Friends may call directly at the church on Saturday from 1:30 p.m. until the time of service. In lieu of flowers, memorials may be made to the Appleton Education Association, National Parkinson's Foundation (parkinsonhope.org), or Faith Lutheran Church. Online condolences may be offered at www.wichmannfargo.com.

The family would like to extend a special thank you to the staff at Rennes Health Care for all of the support and compassion they showed Jerry and his family.