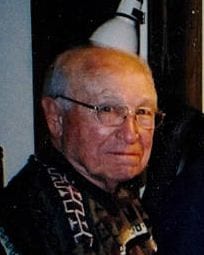 Jerome C. Resch, 92, passed away on Wednesday, December 9, 2020, at Rennes Health and Rehabilitation, Appleton. He was born on April 2, 1928, in Menasha, the son of Louis and Agnes (Dervin) Resch. Jerome honorably served his country in the U.S. Navy and was discharged in 1948. He was united in marriage to Marilyn Laus, on October 2, 1954, at St. Mary Catholic Church, Menasha. She preceded him in death on August 18, 2018. Jerome worked in the printing industry for many years. He enjoyed traveling to many places, deep sea fishing, walking the beach, and many years spent at the cottage.

Jerome was preceded in death by his wife and parents, sisters: Eleanor and Alberta, and brothers: Walter, William, and Roy.

Private family services with full military honors will be held for Jerome. He will be laid to rest with his wife Marilyn at St. Mary Cemetery, Menasha. In lieu of flowers, please make a donation to the charity of your choice.

Jerome’s family would like to extend a heartfelt thank you to the staff at the Rennes as well as Ascension Hospice for their care and compassion.

Dad, you were the Best Father Ever.