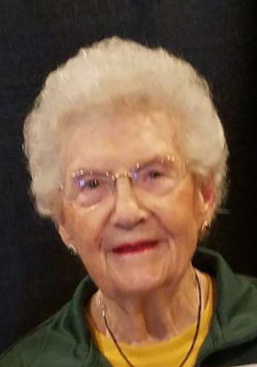 Jeanne was a woman of great faith and it was her faith that helped her live independently, have a good life and a love for all people. Attending mass and praying the Rosary were part of her daily life. Jeanne was born to Treffley and Madeline Courchane on October 15, 1922. As a young girl, she took horseback riding and dance lessons. She loved animals, especially her dogs Chubby, Chico and Cookie. Jeanne attended Kimberly schools, graduating in 1940.

She married Theodore “Ted” Maas in 1943 at Holy Name Catholic Church in Kimberly. They lived in Ft. Benning, GA during Ted's military service and returned to Kimberly in 1946. They had seven children: Pam, Marijo, Mike, Becky, Sue, Annette and Jeff.

Jeanne loved her family and friends and would remember everyone's birthday, anniversary or special occasion with a beautiful handwritten card. She was a wonderful cook who could whip up a kettle of chicken soup by just waving a chicken and some vegetables over the pot. Jeanne made it a priority for the family to gather twice daily for lunch and dinner seven days a week. She was a lifelong member of Holy Spirit Church and member of the American Legion Auxiliary. She golfed well into her 80's and enjoyed many years with her golf friends at Fox Valley Golf Club. She also enjoyed bowling. She and Ted were die-hard Packer fans and were season ticket holders, having attended the Ice Bowl and celebrating her 95th birthday at a Packer themed party with family and friends. In later years she enjoyed following the high school and collegiate sports of her grand and great-grandchildren.

Her extended family also includes many nieces and nephews from the Courchane and Maas families.

She was preceded in death by her husband Ted, her parents, her brothers and sisters-in-law Jack and Nelda Courchane and Dick and Lois Courchane, son-in-law Alan Hietpas, and great-grandson Alex Terry, her in-laws Henricus and Maria Maas and Ted's siblings.

The funeral liturgy will be held at 12:00 Noon on Friday, June 14, 2019 at Holy Spirit Kimberly Campus 600 E. Kimberly Avenue in Kimberly. Friends will be received at the church on Friday from 10:00 AM until the time of the service.