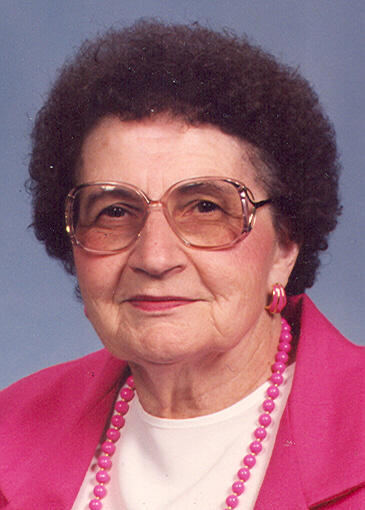 Age 91, passed away on Tuesday, December 20, 2011. She was born in Stockbridge on September 10, 1920, the daughter of the late George and Mabel (Kenney) Hemauer. On July 20, 1943, she married her husband of 57 years, Wallace Eldred. Prior to her marriage, Jean worked at her father's general store in Stockbridge. Later she worked at Hahn's Lanes and Gimbel's Department Store in Appleton. For more than 60 years, Jean was very active in Sacred Heart Parish, Appleton, where she was involved with Christian Mothers, served as a eucharistic minister and volunteered in the parish office. In addition to raising five children, Jean enjoyed bowling, traveling, gardening and socializing with her friends. Jean will be remembered for being a good friend, a doting grandmother and an avid Packers fan.

The funeral liturgy will be at 11:00 a.m. on Tuesday, December 27, 2011, at SACRED HEART CATHOLIC CHURCH, 222 E. Fremont St., Appleton, with Fr. Robert Karuhn officiating. Friends will be received at the church on Tuesday from 9:00 a.m. until the time of the service. Entombment will be in Appleton Highland Memorial Park.

The family extends a special thank you to Jean's neighbors, Tom and Cindy, for their help and support.

A memorial fund in Jean's name is being established for Sacred Heart Catholic Church.