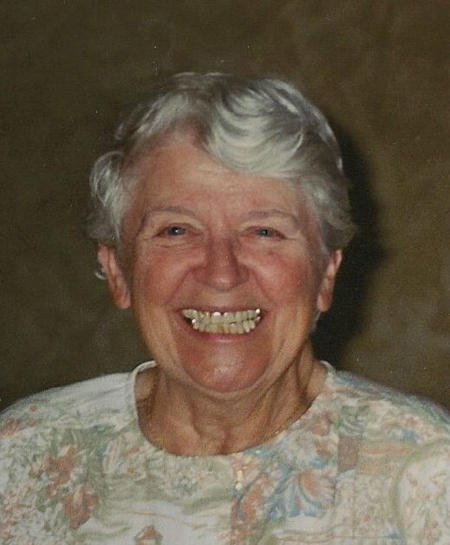 Jean F. Wallace, 78, Appleton, passed away on Sunday, March 28, 2010, at the Rennes Health Center, with her family at her side. Jean was born on February 17, 1932, in Oak Park, IL, the daughter of the late Clarence and Dora (Laurine) Frase. On August 21, 1954, she married Ronald J. Wallace in Oak Park, IL. Jean graduated from college in 1953 with a Bachelors Degree in Education from the University of Illinois Champaign. She later received her Master's Degree in Education from the University of Wisconsin Oshkosh. Jean taught elementary school in River Forest and Lockport, IL and in Appleton, WI. Jean and Ron were long time members of the Appleton Curling Club, where Jean was President of the Appleton Ladies Curling Group and subsequently served as president of the Wisconsin State Women's Curling Association. She was also an avid golfer.
Jean is survived by her loving husband, Ronald Wallace, of 55 years. Her sons David (Barbara) Dolan-Wallace, Green Bay; Craig (Staci) Wallace, Madison; and her daughter Laurie (Marty) Miller, Whitefish, MT. She is further survived by her grandchildren: Corey Dolan-Wallace and husband, Michael Gose, Waverly, MN; Jamie Dolan-Wallace (Special friend, Scott Cech), Appleton; Shawn Dolan-Wallace (Special friend, Matt Luckhurst), San Antonio, TX; Clare Miller and Anne Miller, Whitefish, MT; her sister Lois (B.B.) Browning, Kerrville, TX; her brother–in-law, Charlie Causer, Mission Viejo, CA; and numerous nieces and nephews.
She was preceded in death by her sister, Carol Causer.
A visitation for Jean will be held on Monday, April 5, 2010, from 4:00 p.m. to 7:00 p.m. at the WICHMANN FUNERAL HOME, APPLETON.
The family would like to extend a sincere thank you to the staff at Rennes Health Care Center for their loving care.
Wichmann Funeral Home
537 N. Superior St.
Appleton 739-1231
Online Condolences
www.wichmannfargo.com