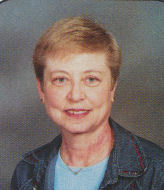 Jean Hahn, age 68, of Appleton, passed away on Monday, December 15, 2014 at Brewster Village. She was born on January 20, 1946, in Appleton, to the late Carlton and Mary (Brum) Hahn and big brother Richard “Dick” Hahn. Jean attended Jefferson School, St. Joseph Catholic School and finished 8th grade at St. Pius X Catholic School. She graduated from Appleton High School in 1964. Following graduation, Jean worked at Appleton Coated Paper Company (now Appvion). She continued her employment over the years with Killoren Company and Midwest Telephone Supply, and she retired from Town & Country Electric. Jean continuing working part-time for Valley Transit and officially retired in 2010.
She was baptized, received first communion, and confirmed at St. Joseph Catholic Church in Appleton. After several years as a member of St. Pius X Catholic Church, she returned to St. Joseph Catholic Church, where Jean served as an usher and was on the financial council board.

As a child her parents took her to several Milwaukee Braves games and that passion continued into her fondness for the Brewers. She received her gambling gene from her father, and enjoyed visiting Las Vegas, Laughlin, and Wendover in Nevada; Tunica, Mississippi, and Atlantic City, New Jersey, as well as many Indian casinos throughout the Midwest.
Jean enjoyed playing softball over the years and was on many different bowling leagues. She was lucky enough to bowl several 600 series. Jean was a Packer fan, and had the opportunity to attend the first Super Bowl Game on January 17, 1967 with her dear friend Lynn Mendez.

Jean loved to bake, and we will miss her amazing brownies.

In February 1968, Jean was diagnosed with Lupus, which she struggled with for the rest of her life. She is survived by her brother, Dick Hahn; nephew Derik (Alicia) Hahn and Jake Jaworski; niece Tasha (Ken) Jaworski; great nieces and nephew: Melanie and Ryan Hahn; Jada Jaworski; very dear friends: Mary Czerwinski, Shirley Hennessey, and Marion Schimmelpfenning; along with many cousins and friends.

The funeral liturgy for Jean will be held at 10:30 am on Friday, December 19, 2014 at ST. JOSEPH CATHOLIC CHURCH, 410 W. Lawrence Street in Appleton. Fr. Jim Leary, O.F.M. Cap. will be officiating. Interment will take place in the parish cemetery. A time of visitation will be held at the church from 9:30 am until the time of mass. Online condolences can be offered at www.wichmannfargo.com.

Thank you to the administration and staff at Brewster Village for their loving care of Jean.